We Found A Good Cop!

Just lately, and not by design, my posts have concerned the police, how they have changed, how they operate and what we ought to expect from them.

Well, I found one that was doing his job. Properly. Sadly, he is not here in the UK but it matters not. The way this sheriff went about defending one of the citizens of Nye County in Nevada, qualifies, in my humble opinion, for a standing ovation. 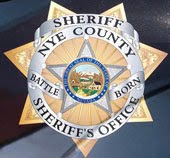 The short story is this: The Bureau of Land Management (a Federal outfit) said that they had a right to water on Wayne Hage's ranch. He didn't think so. He filed an action with the court. Still the BLM harassed him, and they were joined by the US Forestry Service. Now he has two federal outfits showing up at his ranch, armed to the teeth, threatening to seize his cattle. He calls his local sheriff, Tony DeMeo, who turns up, and kicks the federal thugs off the ranch. DeMeo knows that the BLM has no right to seize anyone's cattle and joins Hage in the fight. I won't spoil the ending for you.

Instead, I ask you to go here and read the text, and also to watch the three short videos that Sheriff Tony DeMeo has made explaining the whole thing.

My point, not that it needs underlining, is that we need more cops like Tony DeMeo who understand, and abide by, their oath of office. The office of constable is an ancient one, and it has been bastardised to such an extent that people like me do not recognise them anymore. At least, not as the peace keepers they swore to be.

I personally think that this man deserves a medal. And I think that all police forces should be run like his.

Good find.
Now just got to get one of these into the hands of UK plods and we should be golden!

I read that card when I was at the site and meant to highlight it.

You saved me a job. Thanks!

You did indeed find a good cop - but look how far you had to go to find him.

I still say that I wouldn't piss on a bloody copper if he was on fire.

Ah, yes, but they have elected police chiefs, CR. Hopefully, it will come our way soon. There's still no sign of ACPO being dismembered either, nor any other of the top-ranking quangos that run our lives.

A police chief studying the constitution and implementing it in a fair manner on behalf of the citizens.

Relate this story to ACPO and I think the response would be 43 blank stares. Their new labour created mind-set would not compute.

Credit here it's due.

Doubtless, this was all done in the name of "Sustainable development" - i.e., Agenda 21, which James Delingpole has written about.

This is happening all over the world, Australia having been in the spotlight recently with a hunger striker farmer.