All Your Rain Is Belong To Us

Come with me to Utah.

When it rains though, you are not allowed to collect it because it belongs to the state! 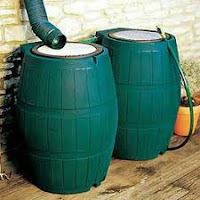 Rain barrels = theft. So there.

The reason given is that Utah is the second driest state in the US and A. More bizarrely, people go along with it. They seem to have forgotten that the state owns nothing. No government in the world, assuming it forces people to pay tax, owns a single thing. By default, everything that was paid for by the taxpayer, belongs to the taxpayer. There is no such thing as government money, or government property. It's yours.

This is the first time I have heard/read about a government/state claiming ownership of the water falling from the sky. Apparently, they don't own it while it is wrapped up in a tornado or a hurricane, and it is kicking shit out of your home, just when you decide to collect it in a rain-barrel for later re-use. Not a bad deal, eh?

There isn't much left, is there? They claim dominion over the land, now they have started on the water, all that leaves is the air that we breathe.

This is going to end very badly.

Cheeky bastards!,so rather than collect rain water it is no doubt left to drain away...wasted!

Part of the british water bill is for collecting rain that falls on your property.
My mate rented a unit to store some stock in and he got a water bill. He explained that he does not have a supply in the unit but they said the bill was for collecting the rain that falls on his roof (via sewers)because "it belongs to them".
He said "Stop it fucking falling on my roof then!"

In 20 years time, the Winston Smiths employed in the Ministries of Truths will be changing every history we know of even the words to classic songs such as the Hollies "Sometimes all I need is the air that I breathe" to "Remember, to pay the tax on the air that you breathe...."

Honestly, charging for rain water and the people put up with it? (shakes head in disbelief)

There was a story l read some years ago about a family living in the UK near a stream. They constructed a small waterwheel and generated their own electricity. The Water Board charged them for the use of the water! :)

Remember seeing something to that effect on watchdog a year or so ago...

"all that leaves is the air that we breathe" assuming carbon tax is not for the air we breathe out?

That's all we fucking need. I am willing to bet a pound to a pinch of Chinese excretement that some wet-behind-the-ears "researcher", still held together by his spots, is going damp with excitement in the bowels of Westminster. Any day now a new decree will be issued ...

Shares are now available in "The Sun plc" ... stand by to be taxed via variable scale based on the shade of your sun-tan. (exemption certificate for Blacks available from the post office - £200)

It could go on and on.

"That'll be £5 per wave. We own the moon. That's our gravity causing them waves. Pay up".

"We the NWO have exclusive rights now to the sun. Seeing as we are the soul inhabitants of this galaxy, we now demand that you pay us a 'time spent outdoors tax.' This will also include a tax on any plant life you may grow in your backyard." Now that we own Rain PLC and Air PLC you will also be expected to pay for each plantlife that will utilize such features. You should also strongly consider the plantation of grass in your gardens as each blade will also come under this tax jurisdiction.....blah...blah"

It could go on and on and o...
And the sheep would just call people like us paranoid? LOL

@Ro-Me-Ro. Yes, and the rain that falls on your property is covered by the wastewater bit. You can fix it so your guttering runs water all the way off your property, they apply for a discount.

Mad. Here on the driest fucking continent everyone thinks you're an anti-social bastard if you don't have a tank and the governments like to nag you about every chance they get. The answer for everyone living in Utah is to bugger off and live elsewhere. As the number of tax payers drop so will the penny, and all will be well providing this happens before they run out of people altogether. Presumably this is unlikely unless all the Osmonds leave.

The Osmonds ARE Utah.

Maybe it's them using all the water to brush all their teeth!

You're right though. It's madness.

Sometimes I think there is a world shortage of common sense.....