Court Of Appeal Shits On The Gurkhas

Just how low can we sink?

Just how little do we value these brave men? 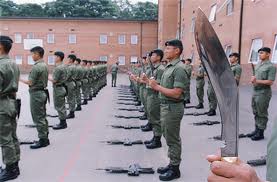 All they asked for was a fair crack of the whip and our pathetic justice system roared "No!" in defiance of public opinion. I have yet to meet anyone who says these warriors deserve less than their British counter-parts.

Apart from the spineless Court of Appeal, that is. Them and the Ministry of Defence. 45,000 Gurkhas died for us. They fought so that we could have a court of fucking appeal. Their contribution in so many wars kept the MoD employed, FFS!

I have shared tents with these guys. I have eaten their food. I have even rubbed some strange tobacco-like shit on my gums (very few of them smoke) in an effort to integrate with them. I have trained with them. I have an incredible respect for them. If we ran fifteen miles they would smile at us, and go on to run twenty. If asked, they would have run fifty.

To bastardise that famous speech of Winnie's, never has a nation owed so much to so few tough men.

Give them their full pensions you gutless, tight-fisted bastards. Take it off the workshy, the lazy, and those that have never contributed a single fucking thing to the safety and security of this nation. Better yet, take that full-to-brimming pension pot from the feckless, the indolent, the no-marks, and the utterly useless bunch of pricks in the House of Commons, and give that to the more deserving Gurkhas.

The Gurkhas deserve everything we can give them. They earned it. They gave up a life in Nepal to serve Britain. Some went home only once every 3 years to see their families. So fucking get it sorted already. Today I am embarrassed to call myself a Brit. The Court of Appeal has fucked this up. Big style.

Legends to a man.

Time for the Advertising Standards Authority to rule that use of the term "Great" Britain is illegal.....

Perhaps we should let a few of them loose in a typical Labour heartland estate, and tell them to take whatever they want. I don't imagine there would be much resistance from the chavs.

I doubt they would want anything from a labour heartland MD, they have PRIDE,

To all the Gurkha's I apologise for this my country that has treated you all so shabbily for so long...its a disgrace!

As a one time member of the BNP, i quite agree ranty. This country is surely beyond saving.

Just when you think our country can sink no lower...

How did we come to be ruled by this filth?

It's a fucking disgrace. Words fail.

Its a disgrace of course,but Im not surprised,the establishment was embarrased by J Lumbley into making a show of giving the Gurkha`s a fair deal,but the establishment is petty,cruel, vindictive and patient.

Now they are taking their revenge and stamping their authority,next the brave, loyal Gurkhas will be de commissioned or at least reduced to the bare bones,pushed into the background and forgotten,until TSHTF and then maybe they will be used again,on the cheap of course...business as usual!

They deserve the same pension as anyone else serving in the British army. It's a fucking disgrace, I won't deny that.

What is it that the establishment so hate about our once great country?

Perhaps we could make a start on repaying these wonderful men by toppling the filth at the top of this corrupt dung pile. Judges and politicians have to be the first to go, hung for treason.

I am going to my sons passing out parade in Pirbright next week, I'd be interested to hear what the army's take on this is.

On an escape and evasion exercise it was let slip accidentally-on-purpose (and unfortunately without any basis in fact) that our pursuers were the Gurkhas. Such was our respect of these men (bordering on alarm if not terror) that we certainly gave of our best to remain evasive!
I agree it's unfair to treat these great soldiers in such a fashion. But, Captain, and I'm reluctant to mention it, if they are receiving exactly what their contract stipulates, they are not being cheated. I am sorry that the Gurkhas aren't getting the same pension as anyone else in the Army, but can't see how a contract can be overturned if it bears two signatures etc etc, especially since the lack of such a contract can allow us all to write off unlawful claims of right.
I am deeply ashamed however that these soldiers weren't given the same deal as other HM forces to start with, but that is perhaps a procedure outside the remit of the Court. Unfair? Yes, certainly, but unlawful? That's the one problem with common law, it's a two-edged sword. There is no room for judgement. Something's either not a breach of common law, or it is. My gut feeling is that it's contemptible and shameful that they aren't getting what everyone else gets, but sad to say the matter rests on what they themselves agreed to be acceptable re: terms when they signed up.
Which isn't to say I'm happy, but I can't see any way around it, because if contracts are the basis of common law then there's nothing much can be done by a court if the contract is lawful.

Tend, very reluctantly, to agree with richard here - so says my head.

My heart says, Fuck the Court of Appeal, Fuck all the overpaid gutless bastard lawyers who forced this decision, and most of all, Fuck the greedy fat cowards who infest the Palace of Westminster and who haven't the greatness of spirit to do the right thing just once in their pox-ridden lives.

Bottom line is if they cost the same as Brit soldiers then they will possibly cease to be post SDSR.

This country doesn't know how to spell the word 'honour'!

Thanks for all the for and against comments.

To those who lean on the "contract" argument: fair do's, but I never saw the other side sign a contract when I took my oath and signed on for six years.

This is known as a unilateral contract. To be fair, a contract has to be bilateral and offer equal consideration.

I do see your point though.

I just think it is grossly unfair. I will probably bang on about it every time it comes up.

I see the slack-jawed, spittle-dripping, arse-crack displaying, Buckfast-slurping mongs daily. 15 of them. Never done a days work between them yet they collect wads of cash from the benefits office.

Not one of these men would ask for money for nothing. They have their pride and their honour. These words still mean something to some of us.

Contracts be damned! Just give them their wedge.

Oh, and I wanted to welcome two newbies: Lesley and Hairy Scary. Thanks for coming by. Good to have you.

To defend me from Richard and Caratacus :)

You reminded me of something there CR and I've been up in the loft - looking for fuckin ages, thank you very much - trying to find my (very) old paperwork. Still haven't tracked it down - definitely says 'Exemplary' honest - but I did find my copy of the Official Secrets Act and, yep, it's only my signature on it. So you could well be right. I was only just eighteen so hopefully it doesn't count now...

I dug out my "red book" a while ago. I couldn't be given an Exemplary rating as I had done some time in the glass house. I got the next one down: Wanker, I think it was.

Never used the book as a reference. Not once. None of my civilian employers ever asked to see it. It stayed in the loft with my Reserve kit. Still got that. Trousers don't fit but the cammy jacket does.

Oh, the OSA is for life, man, not just for while you're in.

As it's an Act, and I am a Freeman and Lawful Rebel it no longer applies to me. But some of the shit I know still has the potential to hurt my old buddies so I will keep schtum.

You deserved to get hot and sweaty in the loft for DARING to disagree with me...:)

Ashamed to British; these guys deserve better; they put their lives on the line for this country; but what do you expect from the establishment , look how they treated our own troop in Iraq and Afghanistan ... Until the nation of sheep wake up and unite .. it will never change .. at best you will win a few skirmishes ... The Ghurkas have INTEGRITY, HONOUR and command RESPECT .. "GREAT" Britain has none !!

My father trained The Gurkas in the jungle for years and he's passed on his respect of them to me.

It's awful how they're treated and I believe they should be allowed to roam wherever they like in Britain and be given pensions!

But if the government are making plans to remove proper pensions of civil servants in schools and everywhere else in the UK, what hope do a bunch of poor 'brown people' have with these awful people?

In this age of equality for all it should be a no-brainer.

Sadly, this is just another case of no-brains.

Man with Many Chins said...

Don't even get me started on this one. So what, they were on a reduced contract.....who gives a flying fuck, the honourable thing to do is to pay whats morally due.

But of course we know there is no morality or honour left in the governance or courts system of this country.

What a bunch of arseholes the politicians are . Words fail me.

Just for once you want them to do the right thing, but they don't know how.

The words you left were bang on.

Arseholes. All of them.