Or, if you prefer, Rebellion On Scottish Island.

I found this heartwarming.

A group of people on Shetland have tired of government interference, senseless statutes, needless regulations, the corrupt EU, our sleazy banking system, and our fiat currency.

(This is for those of you that may think the Shetlands are located next to the Falklands. Click pic to embiggen). 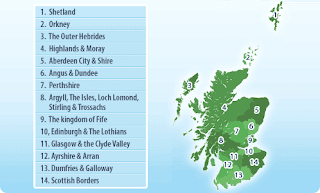 Moves are afoot to declare the island an independent nation and go it alone. I wish them every success.

Read all about it right here.

Here's a large chunk of their reasoning:

"The whole world is sliding into a situation where fewer and fewer people control more and more of the money, resources and power, where ordinary people are losing control of their lives and being dependent on authority in one way or another.


The Sovereign Nation of Shetland is set to reverse that trend. To take back power from the government, the bankers and the global corporations, we have to start thinking locally again. We need a means by which people can simply turn away from the present corrupt system into one where they have control over their elected representatives, their money and banking systems and their law. The Sovereign Nation of Shetland provides that means.

The UK is sleep-walking towards the point where the government has given away sovereignty to an organisation (the EU) so corrupt that it has not been able to have its books audited for the past fifteen years, it is shackled into crippling debt by the recent bank bailout, it has corrupt government and we are seemingly helpless to do anything about any of it.

Strange though it may seem, I don′t blame the government for this. I don′t think they have any choice. Behind the scenes is a much more powerful force, which has the government by the throat. The world of banking and global corporations is run by a small number of very powerful people, to whom you and I are simply pawns in a game - but it′s a game we don′t have to play.

Just stop and think for a minute. During the banking crisis, were there any less resources in the world? The only thing there was a shortage of was money. What many people don′t realise is that money is created by the banks. That gives them the ultimate power over us and all governments and nations. "Give me control over a nations currency, and I care not who makes its laws." as Baron M.A. Rothschild is quoted as saying. It′s the interest on bank loans that means we have to have constant, unsustainable growth. It means the system is set up so that a certain percentage of debtors must default on their loans. And who gets their property when they default? The banks of course.

Just as the playground bully becomes powerless if his victim does not co-operate, we only have to realise that we are the source of that power and we don′t have to continue playing the game. Most people simply accept the inevitability of their situation and think that nothing can be done, but in reality it is only by each one making the decision for themselves that change can happen.

It doesn′t have to be violent. It can happen by people simply changing their minds and turning their backs on the existing situation. Just as it takes only a small number to keep the present system in place, it takes an equally small number to achieve change. As more and more people make the change, the old system will simply die on the vine."

Difficult to argue with, is it not?

The first step will be the toughest. God speed.

It will be hysterical countering the "It's Scotlands oil" claim with a no, it's Shetlands. :-D

I think international waters begin at 12 nautical miles so anything in there belongs to the new nation.

Anyhoo, their declaration includes this:

"the government of the United Kingdom, without any prior right or title, appropriated the seabed around these islands for the purposes of oil extraction AND:

the government of the United Kingdom demands rents for the use of seabed around Shetland, to which they have no right or title AND: "

So there's yer income right there. Tax on "foreign" drilling companies. They don't even have to claim the oil for themselves. They just charge for exploration and production.

And then there's them ponies. I mean, they surely have copyright, right?

They can charge a fortune for them!

I wish Scotland would be so enlighted but we have too many labour supporters here.

Funnily enough I only said to someone the other day that if Tasmania started a campaign for UDI I'd be tempted to move there.

Long time casual reader but first time poster. Speaking of UDI etc. The Cape in South Africa has a political movement aiming for secession of the Cape from South Africa.

I won't bore you with the details however I'm going to leave you with 2 links.

First to this publication from the mid to early 80's by a South African suggesting solution for S.A. before Apartheid was abolished. It is very Libertarian in it's approach and if you have a few spare hours I'd recommend it to anyone who is interested in local rule/politics: http://www.scribd.com/doc/32877434/Louw-Kendall-The-Solution

And the second link because I'm attemtping drive traffic to my blog in order to spread the message of secession. http://capepartyuk.blogspot.com

I lived in Rhodesia just after their UDI so I have some firsthand experience.

Thank you for the links, I will do exactly as you ask. Secession interests me greatly, as you would imagine.

I will also add your site to my blogroll.

Good luck with your plans. The Cape is indeed a beautiful part of the world. I have been there often.