And The "Parents Of The Year Award" Goes To... 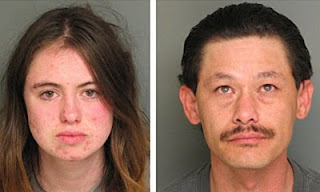 They tried to sell their baby outside a Walmart store in Salinas, California.

According to this the asking price was $25.

Pfft! I was offered an eight year old girl in a Lagos bar once. $8 was the price.

You'll be pleased to know that I refused the "deal of a lifetime" and made sure that the freak trying to do the deal was taken away by hotel security. He had earlier tried to sell me a new AK-74 with a full magazine (30 rounds) for just $9. I declined that supersaver offer as well.

The ladies that Fuckwit and Numpty approached were on the ball too. They called the cops and the two were found, as high as ye olde kite, at their apartment. The littlun was taken into care. As were the fine folks pictured above. Only difference being that their care facility had bars on the windows. Long may that continue.

Do you ever despair? Do you ever wonder why dickheads like this are allowed to breed? This time it was a happy ending. The little girl now has a chance of a normal upbringing if some good people step up.

One piece of advice for when you are old enough, sweetie, declare yourself an orphan.

It has to be better than admitting that the Two Stooges up there are related to you.

I know I'm not the first to think this but what a shame there isn't some sort of test before you become a parent.

PS not that I'm suggesting the government should run one. Just that it's a shame there isn't some kind of natural built in one. I guess natural selection isn't that choosy.

It goes against all my libertarian principles AE, but I agree.

I know there will be people/groups screaming that this "poor couple were the product of their upbringing" and similar shit that is somehow supposed to excuse their behaviour.

But, most of us know right from wrong. And selling babies is nowhere near right.

Maybe they'll get "naturally selected" for a severe kicking down the nick?

I don't wish harm on my fellow humans. Usually.

I'll make an exception in this case.

Despair is a sin, and we should not usually wish harm upon our fellows, unless they seek to do harm first.
That said, yup, put the boot in. Although it might energise the nature/nurture debate in Islington no end. They might even discover the rest of the world resolved it a long time ago.

I put up the post and thought briefly "Surely I'll get lambasted for this", not by the lefties, but by my fellow libertarians.

I am pleased that you guys agree.

No doubt the Righteous will be along shortly to put us all right.

Lethal injection.
The pair of them.

I disagree CR.
Someone should have bought their baby, legally that is and given it a far better home than it currently has.
If they don't want to be parents that's their choosing. I know people will disagree but look at it this way, all three are better off this way, after all - $25? How insulting is that? Pay the money and make sure the kid knows its parents were killed at birth or something and it never knows it was sold.

Our world is f*cked up truly, but stories like this will become a regular occurrence when the west falls below the poverty line, which is destined to happen to one day along with the fact that most of society will be non Christian.

Then again, someone could have just bought the gun for $9, shot the parents and taken the kid for free - problem solved and the child won't have been sold.

Capt. R, yeah, it goes against my libertarian principles as well, which is why I posted again to qualify it. It'd just be nice to think that one day our species might evolve to the point that an ovum and a sperm could detect that the result of their combination would be something that thinks being a sleb is a career and idolises Kerry Katona, and then agree to persuade their respective hosts to do it up the arse instead.

I've put up numerous posts about arming oneself - one way or another - and expected to get lambasted as a psycho. I was happily (or rather "contentedly") proved wrong. As, I suspect, are you will be in this instance, CR.

Punish them harshly, and longly. The disdain these people have shown for their own offspring is tantamount to those who kill them.

I don't normally believe in the death sentence, but these two are really testing me.

There has been and always will be bad parents, that's life. What has changed for the worse is how the bleeding heart liberals have validated, justified and excused such behaviour.

Has this lead to increase in such abhorrent parenting and a generation of selfish pricks? You bet your life it has, in my short 50 years, I have witnessed the erosion of morals and ethical standards. Behaviour that at one time would have caused social outrage and the participants to be ostracised by their community is now not only tolerated but also published for titillation and entertainment in both the MSM and blogs.

Take a look at the recent articles over at GOT, these were not posted for titillation, but what about their sources? How could the participants ever consider their behaviour acceptable? They have no concept of parenting, no concern for their children and no self respect.

Society has lost it's way, their moral compass is broken. If we are not careful there may be a terrible backlash if the fundamentalists take advantage and gain control.