Welcome To The One Party State

The transformation is complete.

Politics have been re-jigged, rewired, and rebranded.

We no longer have a choice. They are all clones of one another. They say the same, they act the same, and they steal just the same as all the others. They overtax, they overspend, and their decisions are as dodgy as Del Boys van. They are all sucking up to the EU and they they keep sending them our money. They bail out banks as if it were the cleverest thing to do. They keep on, and on, with their interfering ways. They simply cannot leave us alone. They continue in their efforts to keep us terrified of our own shadows. They make promises and they break promises, knowing there isn't a damn thing we can do about it. 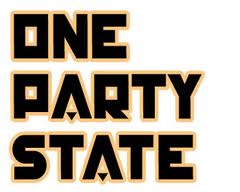 We are cursed now with a one party system. They may wear different coloured ties but that is the only difference. They think the same and they all lie, cheat and steal to further their own careers. They are not interested in you, your family, your welfare, your hopes, your dreams or your aspirations. They continue to steal over half of your salary from under your nose every single month. They continue to watch you on five million cameras. They track and store your emails, they store and record every single phone call you make.

Our troops are still in Iraq, Afghanistan, Bosnia, and a dozen other places we have no business being in. Our sons and daughters are still coming home in body bags via Wootton Bassett. A town remarkably MP free. No "decent" MP will pay his/her respects. They mumble platitudes in parliament hoping that they have fooled most of the people most of the time, and guess what? They have.

Think back. Pre- and post-election. What has changed? Not a damn thing. We still owe more money than can possibly be repaid. We still grab ankle every time some Borg from Brussels even glances in our direction. Those "cast iron guarantees" are still made of warm plastecine, our lawmakers still don't make law. They just rubber-stamp crap from the EU. They don't even bother to read it. Who amongst them has the time? There are gravy-trains to be ridden, bandwagons to be leapt on with nary a thought, there are expenses to be claimed illegally. So much to do, so little time.

Meanwhile, back in realityville, this December is our last as free men and women. Go here and read. Take a tissue with you. If you have an ounce of compassion for our once great nation, you will need it to wipe your tears away.

We are undone. We are ended as a nation.

Find out which Region the EU designated for you. Then when people ask "Where are you from?", you will have the right answer for them. I'm living in the North Atlantic Region, for those that may be interested. 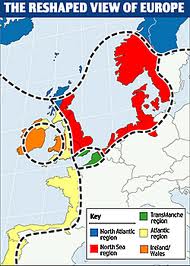 And whose fault was that? You may well ask.

The answer is in your bathroom mirror. If you want someone to blame, look there first.

If you feel ashamed, that is only right and proper.

I have looked at
http://www.northernperiphery.net/
and
Interregional Cooperation Programme "INTERREG IVC" 2007-2013
http://www.interreg3c.net

Oh yes, how they have become so dependent upon EU funded projects.

and how the 'regions' keep changing.

The one party state, thought you all knew about this stuff, I posted on just such a situation way back in 07, I called it "too late, too late, shall be the cry". Whats changed since then is that now its only a few short weeks away. Time to get back to my taliban training, I can do jihad just as well as Al Kahida.

One can judge the EU by it's current "president" Rumplestiltskin. His own country has a debt crisis that some say is worse than lreland or Greece, but definitely on a par, and yet nothing is being done about it because it still has no government! Do we hear about it? ... no, they simply ignore it in the forlorn hope it will go away.

lncidentally, Smoking Hot's wife said years ago, and even before Gorbachev, Bukovsky, that the EU was just the West's version of the former USSR. Seeing as she lived under USSR rule and her grandfather was a senior official in that regime, l took notice of what she said ... and her predictions. So far, she's not been wrong!

When do people wake up and see whats happening although to be fair it seems like we have all been turned into drones and brainwashed by the MSM and have that feeling of helplessness as we no longer have democracy in the UK. Our only glimmer of hope is through blogs like yours where we can read and be enlightened.

The problem is Cap'n, people simply aren't interested. The only time most people will actually move and do something about the impending doom for all is when the shit hits the fan in their lives - loss of job, wife runs off with the kids, made homeless, depression hits...you know the sort of thing.

Some people don't need a jolt in life to get them going. They're able to rationalise life and educate themselves on the real reality and start trying to put together ideas on how to stop Armageddon. However there are those, as explained, who do need a kick up the backside.

Do you know Cap'n that if we could all get in touch with the parents/loved ones of the police within the UK, educate them on what's going on and let them give the ultimatums to their children/partners in the force, we could solve the problem within the UK? If we could do it worldwide then the answer is obvious.
Once the police are no longer there to protect the elite then in a word the elite are fucked.

There will be no peaceful solution to this. There's bound to be violence somewhere down the line, but really, I see the police as being the major problem within society because they're enforcing the will of the governments and elite detrimental to the people.

In a nutshell and I hate to quote GW Bush, but in this instance he's very correct. The police are either with us or against us. There's no sitting on the fence here I'm afraid.

Zaphod, what is this? Wikileaks about my wife? :)

What you say is true though. My wife and her friends looked upon the EU as nothing more as to be able to get access to the EU. Also, they intend to get as much out of it as they possibly can ... and that runs to the very top of government. They are very adept at getting round rules and regulations ... they had years of training whilst under USSR rule.

Going back to main subject .. the masses will never understand what is going on in the UK until you can put out commercials about it in the middle of Coronation St or X-Factor and the like. And even then it's a maybe!