If ever I leave this blighted isle, I will head for Switzerland.

As you will be delighted to see in this report of their latest referendum. They have voted to deport all foreigners convicted of serious crimes, rather than pay them to live in relatively luxurious gaols at the taxpayers expense. 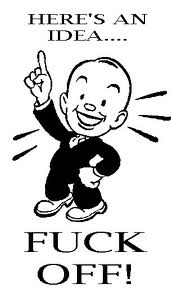 I could go for some of that.

Naturally, the Hand-Wringers, for whom the criminals shall always remain blameless, are bleating already.

"I don't regard this as a very good sign for our country," said Christian Levrat, head of the centre-left Social Democrats (SP), which opposed the proposal."

And, just as naturally, they want to bleed the wealthy dry, no doubt to pay for the lazy, the feckless, the terminally entitled, and of course, the rapists, the paedos and the killers.

"The SP proposed levying a minimum tax of 22 percent on income above 250,000 Swiss francs ($251,200). But support for the measure waned after business lobby economiesuisse warned it could trigger an exodus of the rich and their companies. Currently tax rates vary among cantons, yet they remain low compared to elsewhere in Europe"

If only our MPs had a spine, or god forbid, a pair of balls, we could do exactly the same.

Which would leave thousands of cells free for occupation by those damn interfering bloggers and their free-thinking commenters......

That's good news, and all credit to the Swiss for having a system that lets people say what they think on national issues. We could do with the same. But I notice that it still has to pass through the Swiss Parliament. I will follow that with interest. If we had a similar system in the UK, that's where it would run into the buffers. No UK Govt would have the guts to enact anything like this, still less the anti-minarets one from a while ago.

And the proposal in the referendum was quite limited - only serious crimes such as rape or drugs/people trafficking are mentioned. Since no-one has to break the law at all, I would prefer a rule that said: "you are welcome here, but break just one of our laws and you will be sent home".

It's a start, though.

CR: have to say I can but echo the general thrust of Richard's comment!

As I posted to Sunny Hundal just now, if he doesn't like it here then: foxtrot oscar!

"I'll come to your country, live at your expense and remain here after I've comitted crimes"

I can't fathom why that sounds reasonable to some people.

Some people are so desperate to be seen as right-on, caring and non-prejudiced that they will accept almost anything that a reasonable person will dismiss out of hand. Otherwise, how come we are still supporting that chap with the hook and one eye?

What's that word up there, CR ? The one in blue.

What the hell is a referendum ? Obviously something they do in Switzerland but not the UK, because I've never heard one of those before.

It's a Swiss word.

It means "You decide. Not a bunch of overpaid imbeciles in government".

We have a similar word here. You may know it: revolution.

Revolution has a sister. She is called rebellion.

OOOh decisions , decisions, the three 'r'sany chance we can have a referendum on whether to have a reolution or rebellion, no other option just one or the other ...

Good for the Swiss but just watch as the lefty establishment water it down citing International Obligations.

I love you Swizterland, sorry about pinching the flicknife.

A wise man starts a Rebellion.

An idiot starts a Revolution.

Our current state is due to idiots. An Infant could realize that they have too many variables in play. They may try to offer us a 'Hitler' or a 'Stalin'.

What we need is a Jefferson to give us a Constitution backed by existing common law.

The whole of Ireland will unite under old school Provos' when this goes tits up.