This post was (in part) triggered by something Pa Broon said in the comments of the Vote With Your Heart post.

He reminds us that the people of Scotland are not (nor have been in recent times) against the people of England. The thing that unites us is our common disgust for Westminster. Parliamentarians would like us to forget that. They want to appear as pure as the driven snow whilst we tear at each others throats. Let's them off the hook, see?

Just like those morons in the Labour party would have us believe that they managed the country flawlessly for thirteen years. They did not. They piled mistake on top of mistake, had themselves a whale of a time doing more damage to the UK than we have seen in the last 60 years, and now? They blame the Tories. So do I, actually. I recall watching PMQ's when Colostomy Brown was at the helm, and I cannot recall too much opposition going on. The Tories are as guilty as those failures in Labour, yet they (the Tories) would happily allow us to believe that they (the Tories) were entirely blameless for the fiasco we now have to deal with.

As if that weren't bad enough, the conservatives and the ZaNuLabourites would now be completely happy for us all to look at the EU when something/everything goes badly wrong. "Blame them" is the battle-cry.

Labour, the same party screeching endlessly about high energy costs, are the same party that began all this green nonsense, egged on by Brussels, who never saw a gravy-train not worth leaping aboard. Fifteen years later, when those admirable souls who have consistently campaigned against the greenies have finally proven that warble gloaming is a world-class scam, we are billions the poorer for it. Those who spinelessly, slavishly agreed to all the demands have no idea how much financial harm they have done to citizens and businesses. Elsewhere in Europe, the countries that aren't too interested in the green agenda simply ignore it.

But, I digress, slightly.

Back to the blame game.

Yes-it was Labours fault. (They are/were too weak-minded and selfish to stop it).

Yes-it was Conservatives fault. (They didn't do enough to stop it).

Yes-it is/was all the fault of the EU. (They are unaccountable for anything, why would they stop it?)

And yes-it is/was mostly our fault. (We were/are glued to the TV and WE chose to do nothing to stop anything).

Just when will we wise up to that and rise above that?

The next time you are asked to tick a box for any political party, remember this image: 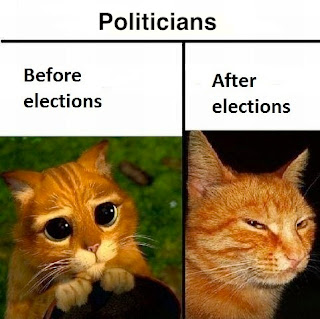 Fix it firmly in your mind's eye then either vote for the independent on the ticket, or turn around and go back home. Before you do, tear up the ballot in front of the officials. Tell the sleazy hopefuls loitering outside the polling station what you did, and why you did it.

Voting for the same idiots hasn't worked for decades.

Nice one Capt. I've gone from 60's to 80's Conservative to UKIP, BNP and now English Democrats. Anyone but those cheating lying main parties. keep up the good work.
Tickety

I hope that Scottish independence acts as some sort of catalyst for change for everyone living in the British Isles.

I have always thought that people tend to get along pretty well when left to their own devices.
I read plenty of opinions that Salmond is anti english - yet I have never heard him say anything anti english. He is justifyably scathing about Westminster, and being english I agree with most of his criticisms.
Likewise the EU. I know some smashing people in other EU countries. We have lots in common and get along wonderfully.
While being extrememly anti EU I am not against them.
I think it is easy and dangerous to overlook the fact that as people we all have the same problems with governments and we should take care to remember that governments are not countries and generally do not represent the people.

DO NOT fill in or sign the Electoral Roll form.

The good news is that as soon as you recognize this you are no longer subject to it :)

i wont go on,and explain my thoughts on this bunch of xxxxx
of `whatever hue`
i will just say i have `never`voted
and have removed myself from the
electorial register.

I feel the country is run by psychopaths with suicidal tendencies, better if no one votes. Why do we need a ruler when we can rule ourselves ? Do not sign or vote your sovereignty to other people.

Captain, you are right again.... Key people within each party are Builderburgers. They literally are all pissing in the same pot!

We could use a general strike to force a general election and vote for independants only.... This will then expose the fact that democracy died ages ago and maybe even wake up a few people...... I'm dreaming again..... Never mind, one can hope.

The politicians don't work for us. They work for, in order of importance:
a)Party
b)Party donors
c)Personal interest and gain
d)Foreign interests eg EU
e)A minority of the poor fuckers living in their constituency.

A handful of MPs are thick as pigshit and just obey and do what they are told. Most are on the take. Too many are bloody lawyers. Name me one great statesman we can be proud of and trust among all this rabble who purport to represent us and our British way of life?

Is this really democracy and is really the best this once great nation can do?

And yet the masses still go out and vote thinking this will change things....

Don't vote, it only encourages them!

"By dividing the voter through the political party system, we can get them to expend their energies in fighting for questions of no importance."

So sayeth the banksters.

One must decide for oneself about the register but fwiw I'm with the others here who advocate getting off the thing altogether.

>DO NOT fill in or sign the Electoral Roll form.
This.
Engaging with them on their terms only encourages the bastards.