The Eurozone is having problems. Whilst I care a great deal about the human element, I am rejoicing that this forced community, this absurdity, is on the verge of collapse.

And the two countries in the firing line tanked too, though the downgrade of Greece came after Athens' stock market had shut — even so the composite index ended 6 percent lower at 1,696.68. Lisbon's main PSI index was 4.4 percent lower at 7,223.04.
Once again, the debt crisis engulfing the eurozone was at the forefront of investors' attention despite last week's request by the Greek government to tap a rescue package from its 15 partners in the eurozone and the International Monetary Fund.

Portugal joins Greece as both of these countries are downgraded by Standard & Poors. Who is next, I wonder?

Any budding economists care to guess?

EDIT: Don't bother. It's probably us. Nicked from Burning Our Money 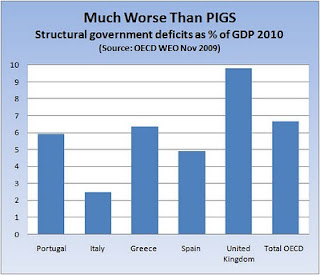 I wonder what Mr. Soros and a couple of others are up to at the moment?

Maybe it was them that caused the stocks to tank as they dumped them?

Mind you, if old George is as sharp as we all think, he would have sold his stock months ago.

Spain next. What to do with my Euros in the bank? Perhaps change them into Sterling and shove them in my mattress?

Bad idea Sue. We aren't far behind the Greeks.

Buy gold, or silver, or something that you think will hold its value.

Swapping one pile of pretty (but worthless) banknotes for another is an exercise in futility.

If this more than a blip and the trend continues then you can expect the EU governments all coming out lambasting the markets.

This is total hogwash of course and arse covering as the markets are only reacting to and expressing their lack of confidence in the economic policies of the EU governments.

The electorate will buy into the scorn heaped upon the markets by heads of government and will call for retribution and the punishment of the naughty marketeers. When they should be calling for the stringing up of their politicians.

Only good thing to come out of this is perhaps, the eventual collapse of the EU Dictatorship.

I am more hopeful. I think we should swap your "eventual" for my "inevitable".

The experiment failed. 27 nations working in harmony? It was doomed from the start. It may have looked good on paper, as a concept, (like communism) but in practise? Chaos, over-regulation and collapse.

When it dies I will party like I have never partied before. I will merrily dance on its grave.