You Can't Say What?

Apparently, using any of these words brings you to the attention of the security forces in the US and A.

To see them (without the need to embigulate), go here.

I am, therefore, utterly delighted to use them all in this blogpost.

They say that they are trying to protect us..... 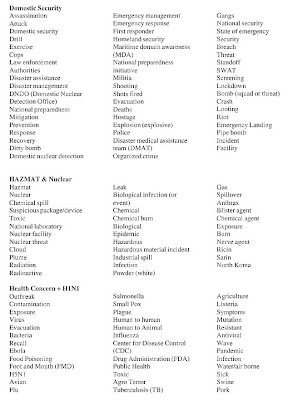 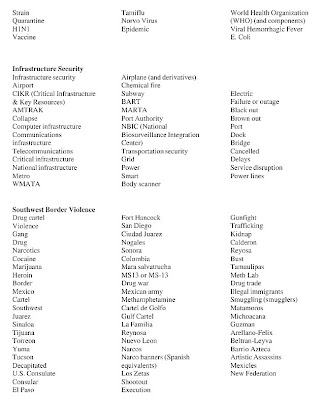 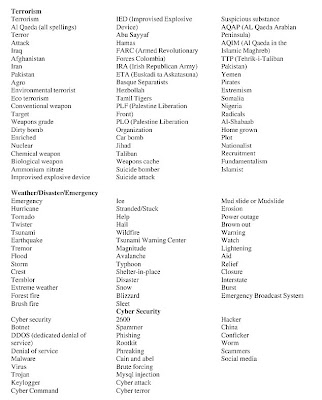 Do me a favour, US and A, (and the UK government, come to think of it), STOP protecting me.

The illegal wars and subsequent occupation of both Iraq and Afghanistan have not made me safer. Arguably, it has made me less safe as you radicalised a whole generation of Muslims. If you had kept your bombs and bullets away from those countries, thousands of US and coalition troops would still be alive today. As would hundreds of thousands of non-combatants. Our sons and daughters would not have come home with broken bodies and broken minds. They would not now be homeless in our streets and they would not now be sat in gaol cells, rotting. They rot because your duty of care ceases immediately the uniform comes off when they are discharged. They gave everything and when you were done with them, they came home to no care whatsoever. For shame.

Your days of manipulation are coming to an end. The false terror you vomit all over us on a daily basis is no longer working.

We are no more terrified of Al Qaeda than we are of fluffy bunny rabbits frolicking in the noonday sun.

Neither threaten us. Neither have attacked us on our home soil. Nor will they ever.

It's time to end the (already) lost War on Terror. You lost that one before it began. We are not naive. We know that wars are big business. Not just the short-term spike in arms sales-"Look how much damage this missile does, look how fast this jet flies, look at these magnificent drones, and just look how effective this rifle is!"-but also the minerals. That's why you are there. You want the oil. You want the gas. You want the gold, the diamonds, and the other $1 trillion worth of minerals.

Democracy-sham that it is-is the furthest thing from your tiny minds.

Don't mistake me for a pacifist, either. I too wore the olive green, and I too, carried the weapons. When attacked (or should that be if?) I believe a sharp response is required. But this nonsense has long since ceased to be about defence. Once again I say shame on you. I would pity you if you had only erred once but this is an error you seem fond of making. A true sign of insanity, but what else can we call you? You are all fucking psychopaths.

Get some help, and get it fast.

The first clue that you were a sandwich short of a picnic was when you started criminalising words.

Wake up, FFS, and smell the stupidity.

I think it could be a project to use all of them in a single blog post in the most ridiculous way possible.

I thought about AE, but I are melting here.

It's 30 degrees in my wee office and 'er indoors has me working like a dog. I sneaked off to do a post and this is the best I could do in the time.....

Surprisingly it excludes 'homeland security' and 'cunts'. In the words of Lennon and McCartney, "these are words that go together well"...

I think it behooooooves us to add them into the mix.

Since one of my offspring is collaborating online with a friend to write a dystopian sci-fi novel and my blog has distinct apocaholic tendencies, I supppose we ought to give ourselves up now and save time.

meanwhile, I can understand the 'homeland security' terms being there, but what's with the meteorology fixation? Tornado? Hurricane? Snow?

Bigger question to my mind is: why is the Fail publishing this now?

This story appeared in the Activist Post back in February, as well as that bastion of Web2.0 journalistic endeavour, the Huffington Post:
- http://www.activistpost.com/2012/02/official-list-of-words-feds-monitor-on.html
- http://www.huffingtonpost.com/2012/02/24/homeland-security-manual_n_1299908.html

It actually comes from EPIC, which the Fail does reference; yet, again, this is from February:

However, the word list has actually been in the public domain since November 2010.

(Appendix A is a list of sites that are monitored.)

I find it difficult to believe that the DHS has not altered the list at all in a year and a half....

Well this may fuck them up

Now it's got them reading this I can say, we all know that these words - every one of them - are not in our word list - we have a whole other set of words 'WE' use and they got none of them ;-)

Probably why they have caught no-one yet.

'The rain in spain falls mainly on the plain' if you know what I mean.

Namaste, rev;
Let them try to code break that, the key is 'K' LOL

If you wanted to get paid for hanging around on the internet, that's the way to do it.

If the boss comes by and finds you looking at things about holidays in Turkey, all you have to say is that it mentioned "Trojan".

Checking a barbeque recipe? Well, it said 'gas' and 'pork'.

There must be a lot of security analysts trying to make sense of postings up to 2010 about Brown out, especially as it will also have picked up "failure" and "outrage". I bet Guido Fawkes gets half his hits from the security services.

Angry Exile has hit on something: a prize for the person who manages to combine all of those words in a non-threatening way.

Using all the words in one post would be an interesting exercise. But really all that needs to be done is for EVERY single E-Mail, blog post, whatever, that is sent, to include at least ONE of those words.

Their system would be flooded out in seconds.

(Nuclear / Bilogical weapons..... There, that is my contribution foer the day.)

@ Furor Teutonicus: perhaps CR should nominate a different word weekly, to be used by all visitors?

Sackerson/AE; if you will permit...

There’s a US department that’s searching the net
They're looking for a mention
Of hostile intention;
From morning to evening their analysts vet
Social networks in search of a terrorist threat:

They’ve drawn up a list that includes Iran,
The Mexican Army,
Typhoon and tsunami;
So woe betide bloggers who name Pakistan
Or ricin or sarin or Afghanistan.

Captain Ranty, I apologise if my small effort brings them to your door...still, it would mean your well-reasoned post hitting home to the right target.

Well, at least Dubya is safe from further investigation. He never could say 'nuclear', it was always 'nucular' .. and quite why he thought there should be a war against 'tourists and tourism' I've never been able to fathom. Wanker.

And the Monocular Mutineer, the twat Broon, is safe too. He had it in for that well known drunk 'Alky Ada'. Another wanker. :-)

Bravo Macheath. I'm putting you down for our next Eurovision, OK?