Ever since the smoking ban kicked in back on 26th March 2006 I said that it was the beginning of the end for centuries-old freedoms.

I maintain that statement today.

Things have gone from bad to worse as out-of-control governments pass more and more legislation. The smoker ban was an experiment, a first step to see how/if they could control a population using social engineering. That social control continues with minimum pricing for alcohol "units" with Scotland having stamped the seal of disapproval on drink by stamping the seal of approval on a rate of 50p per unit. Will this stop excessive drinking? No. Will it increase the amount of dosh heading the Treasury's way? Absolutely.

Most, (if not all) legislation is a business model. The only goal is to generate revenue. Your MPs don't give a shit about your health, but they do care a very great deal about your disposable income. They will plot and scheme late into the night to figure out new extraction methods. That may explain why the coalition broke all records in 2011 by enacting an eye-watering 4,116 new ways of taking our money off us.

Like it or not, we live in state that absolutely adores spying on us.* 4.5 million cameras aren't enough. They need now to pry into our personal emails, tweets, texts and phone calls. How they must rage knowing that they cannot capture each and every face to face conversation as well. No doubt someone, somewhere, is working on that. Just like in the movie Freeze Frame (2004 with Lee Evans), we may all find the need to wear a camera headset so that we can record every waking (and sleeping) moment so that we know for sure we haven't bent one the millions of rules and regulations.

*If you disbelieve me, just wrap your eyeballs around this latest privacy invasion. 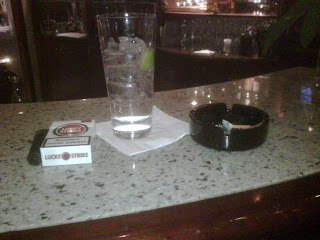 The above is a snapshot taken last night in a bar in the freedom loving Czech Republic. No-one did that false coughing or the inane hand-waving, no-one looked at me sideways, no-one tutted, and there were no cameras to record my sinful ways. The hotel, just like the dozen bars I frequented this week, had good air management systems and when it was dry in the evenings, it was a pleasure (and MY choice) to sit outside the bar and smoke.

I try to explain to non-smokers (not anti-smokers, there is a huge difference between the two) that their freedoms were curtailed as well as ours. They lost the freedom to decide for themselves whether or not it was life-threatening to enter a bar that allowed smoking. Incidentally, no serious study has ever proved that second hand smoke in a bar is lethal. Unpleasant for some, perhaps, but dangerous? No, not in the least. To this day, not one single death certificate contains the phrase "Cause of death: second hand smoke".

In 2006 we had a stock of 58,000 pubs & clubs in the UK. Just a few years on, we have lost around 11,000 of them. Even today (and I do understand the recession hasn't helped matters) we are losing 50-60 pubs every week. I say this: amend the legislation to allow bar owners to decide whether they want smoking or not, and it will be a shot in the arm for our dying hospitality trade.

Bizarrely, I have come to associate the smell of tobacco smoke with freedom. It smells a damn sight better than the piss, the B.O and the cheap perfume which we are assaulted with in pubs nowadays, and smoke smells a damn sight better than the lies and hypocrisy of the anti-smoking crowd. Their biggest, fattest lie was this: "Stop smoking in pubs and clubs and we will turn up, in our millions, to fill them" They did not show up, then they had the audacity to blame the smokers for the carnage that followed.

If I can smell smoke indoors, I know I am not in an oppressive or repressive society.

Go figure, as our American cousins are wont to say.

Yes I am convinced it was a try it on to see what else the thieving clowns could get their hands on too.
However.
Events are starting to overtake the tri partisan alliance between finance ,MSM and the slugs who infest our parliament.
They have successfully engineered their own downfall.
The only solace we have is we don't have to fall down as far.
Nor did we ever stoop as low.
It was the smoking ban that woke me up to how these excuses for people operate.

While I agree that we need to remove the ban immediately, it won't save the pub. What's killing pubs are prices and the drink drive limit.
Governments increase on alcohol tax, minimum pricing, rates and rent and oil companies on their oil and it becomes pointless going to a pub.
Most barstaff are merely supermarket checkout clones with no desire for conversation and pubs are now littered with Big Brother TV screens playing Sky news over and over along with the religion of football.

As I said in the previous post of Gaius' on voting, I imply the same here. That is removing the smoking ban to save the pub would have the same effect of leaving the EU to save Britain. There are so many factors as to why pubs are dying that the smoking ban is merely the tip of the iceberg.
Like saving Britain, to save the pub you'd have to completely remove the government and all state control.

"Like saving Britain, to save the pub you'd have to completely remove the government and all state control."

When can we begin?

Like I said in the previous post, by not voting, eventually the people can say only 20% of the country is voting. They then say it means 80% DON'T WANT POLITICIANS AND A STATE. SO FUCK OFF!!!!!
By voting it means you want an authoritarian state, regardless to what you may believe. A government governs. Those that govern have authority over others. That consent to govern and therefore allow the state to have control over you is given when one votes.

Seeing as the population of London is about 20% of the UK, move all voters there, to live as the governed and build a big, fucking wall around them to keep them away from the freedom loving population. They can also have the crown as well, which won't be much as the people will have taken back the land they stole. What bliss. London's a shithole anyway and won't be missed.

Unfortunately, during the last few years, Britons have become so uptight and anally retentive that a large section of them are to blame. The left carefully planned their strategy for social engineering programmes and most people aren't even aware they have just become sad, little sheeple.

If we had had the gumption to say "Foxtrot Oscar" and had enough of the population behind us ignoring these inane rules (for I do not recognise them as laws), we could have won this one and many others including leaving the 4th Reich.

Watered down Britons and our communities have become fractured (done on purpose) and unforgivably pathetic.

I put one comment on Conservative Home this morning asking if the "parents nannying hotline" would come in a multitude of languages and got called a racist and told I owe the Commonwealth something. The Conservative Socialists have got the masses by the short and curlies. Freedom of speech and expression are dead and most of them don't even realise it.

Aah, Prague, my favourite place in Europe. I can take or leave pubs in this country, but you're right about getting a sense of freedom from those Czechs who have yet to succumb to the storm of 'social marketing'.

Harbinger is also right that a repeal of the ban is now too late to save pubs, they chose their fate and even if they went back the other way (unlikely), too many people have re-ordered themselves now and are saving a hell of a lot of money as a result.

I think the ban showed how very effete our public are compared with the rest of Europe. Passive to the point of cowardly. I think the 'Great' should be dropped from the country's name, TBH, our people have lost the right to use it.

Agree with you about the smell in pubs, Cap`n. A horrible sweet stench that stays in my nostrils longer than the smell of tobacco smoke ever did. I`d bring back smoking in pubs just to make them smell nicer and I don`t even smoke.

Don't read this or this, Captain, you'll go utterly mental.

These morons are actually registering their fucking homes, FFS, FOR A FUCKING WEEKLY PRIZE DRAW.

(It is not new nor a UK-only thing, but merely this week's occurrences...)

I used to smoke, glad I gave up.
I do miss going to the pub.
Not that I can afford it much.
The smoking ban makes the venture pointless as the flow is constantly interrupted by fag breaks outside and all the pubs are now expensive, sterilized affairs.

My take on the voting or not voting?
Let's see.
I get lots of offers and mail through the post and by telephone. Only the government offers 'free choice' with 'a penalty of up to £1000' if you don't.
So, I choose now to not respond to these threatening letters and offers. I don't want to be forced to do anything or be part or member of any club under threats of penalty. If I wanted to vote, I'd vote, but in all honesty, after the last New Labour fiasco using the 'Things can only get better' song followed up with even more wars and alleged decline, I'm surprised anyone 'got fooled again' and bothers to be 'all in this together'.

It's not voter apathy, it's just plain disgust and distrust here.

TSL, that's hilarious. Anyone near that authority should just sign up for the chance of freebies. What are they going to do? Send people round to check that you're honouring the pledge?

Oh how our taxes are spunked up the wall, eh? Plenty more to cut back on, I'd say. :)

It is no use pointing to the closure of pubs as a result of the smoking ban, that was just an added bonus to Them since alcohol was so obviously next on their list as is now becoming clear to the mongiest of the public.

Re; Smoking . . off topic . . or maybe near-topic . . .but its easy to grow and cure your own tobacco. It doesnt have the 3000 - 7000 [yes, thousands] of additives [mercury and cadmium dont grow on bushes] and is therefore premium quality, easy to get used to, and, er, free. Seeds available online, very very cheap.
They take ages to germinate, but once they take, they grow 5 - 6 foot tall. Very easy to cure [hang them up, wait till theyre brown, then smoke them]
I roll my own cigarillos, and also make rollups. In addition i smoke a minni-ciggy [dot com] which is AWESOME. And much cheaper than rollups. and i smoke [sorry, 'vape' ]in the supermarket. and everywhere else. In short, none of my money goes to the mafia, and i get cheap, healthy smokes. Now, all i need is a decent pub . . oh no, wait, I can't afford a pint . . ive not worked for 2 years [decorator] as the, ah, eastern european cheap labour put me [and everyone else i know, brickies, sparkies, builders, the lot] out of business since 2005. then, of course, the criminal banksters removed 'liquidity' ahem and we went into negative equity. then homeless, livin in a tent. now in a static mobile. . . . thanks New Labour! things really did get better. for the polski skleps.