Home Is The Hunter..

It's good to be back, as always, but I will yearn for the Czech Republic as it is such a lovely place. I didn't see much more than a fraction of it and it is, like most European nations, steeped in history.

The only negative thing I saw, and I saw it times without number, is the graffiti. All those fantastic buildings, and many of them have been 'tagged' by the graffiti artists. Well, the word artist is wrong in this sense because it just looked like a mess. A shame, really.


Walked past an American talking on his mobile phone and I hear: "Just kill it! Bury it in the garden!". Kill what? A horse? A dog? A goldfish? An aardvark? I have no idea.

On the way back to the hotel from the pub: Stepping over a guy passed out on the pavement. It was in a small park and there was tons of space for him to have been. He chose to lie lengthways across the path....

In a 1920's tram (hired by the event organisers to transport the delegates to the Palace for dinner): the tour guide said, with great pride "Czechs are Europe's biggest drinkers. We drink around 150 litres of beer a year each and we want to improve on this! Please help us by drinking as much as you can at your gala party tonight! The Czech Republic thanks you!!" (Can you even imagine the puritans response to that statement here?).

In the hotel bar, on Thursday night: a stunning blonde hooker repeatedly tried to catch my eye but there was a tall pot plant in the way. I made a game of it by leaning slightly to my right, then, when she saw an opportunity for eye contact I would lean quickly to the left. (I have no clue why I did this. In mitigation, I had consumed an industrial amount of Pilsner Urquell (the Nations Favourite), gin, wine, and assorted (but bizarre tasting) spirits. 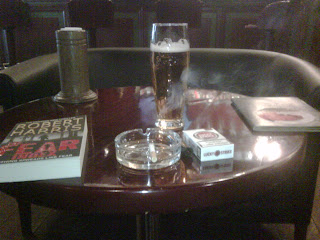 Walking around the city in the evenings: Me, (and my boss), turned down thousands of invites from a) furtive looking geezers and b) pretty ladies waving business cards and leaflets entreating us to "Come to titty bar! Beautiful ladies! Very sexy!" and "Guys, come see sexy show. Very elegant, very dirty!" (Elegance and dirt combined, it was hard to refuse that guy).

In the hotel limo on the way to the airport: the driver had a few words of English and I had no Czech so the conversation was bumpy. He would start a sentence in English and, when he struggled, he would switch to Czech. Even though I was stone cold sober I understood him perfectly well. He then abandoned English altogether and spoke his own language and I spoke mine. It worked oddly well.

The food was excellent. Sausage and red (or white) cabbage doesn't sound too exciting but it was great! Washed down with the Czech beer it made for a great snack or a full meal. It was also a pure pleasure to not have to use euros. The exchange rate at the time was 32 Czech Korunas to the £, so it felt cheaper than it was. Of course, it is all relevant. Pound for pound though, it was still cheaper than here, but then again, most places are cheaper than here...

Get there if you can. You will have a blast.

This did include Becherovka, I take it? A trip to Prague isn't complete without it. Paint-strippingly delightful. ;)

The woman at breakfast was taking pills to cure OCD.

Diary of a hooker

I thought I saw a man I recognized in the bar last night. Not a client, but I just couldn't place him. He smiled, then ducked behind a rubber plant. I thought "That's odd, he recognizes me, too. I wonder where we met?"

I waited for a moment until he came out from behind the plant, looking sheepish. The moment he saw me, ducked the other way and hid behind one of the dratted mirrored pillars. Then he stood up and did that thing which some people love, sticking one arm and one leg so that in the mirror it looks as if they are jumping.

All the Brits do this. It must be something to do with their Royal Family but I can't see the Queen being overly amused by it.

I avoided the two bottles in the mini-bar. For 16 hours.

I think I missed the start of her medication routine. She may have popped far more.

Then again, they may have been Tic-Tacs for all I know....

Thanks for the link.

I am in despair.

I always do the arm and leg thing in a mirror or a corner shop window.

Never gets old, that one.

Growing up is for fools.

My favourite city, been many times. Best place to eat is Kampa Park just off Charles Bridge!