Still think you're a Brit?

Forget it. Since 1999, you have been a Regionnaire.

"The plan by the European Union to destroy the historical borders  --  both internal and external  --  of its separate countries is speeding up.

In 1994 we, in the UK, voted in our Counties at the European Elections for the last time. If you lived in Cornwall, for instance, you sent an MEP from Cornwall to sit in the European Parliament. But by the next EU election in 1999 as far as the European Union is concerned, the counties had been superseded and the country split into twelve Regions. The Provinces of Scotland, Wales and Northern Ireland were considered by the EU to be countries and therefore were established as one Region each, but England instead of being one country was now nine Regions.   This meant that if you lived in Newcastle you now lived and voted in the North East Region of the UK, not England.

This was the start of the NUTS  --  Nomenclature of Territorial Units for Statistics (nomenclature d’unites territoriales statistiques), or the division of all EU countries into areas ostensibly for statistical purposes.   The basic countries have a two letter code  --  UK, for instance  --   and each Region is an NUTS1 and has an additional letter.   If you live in the South East Region, then you reside in UKJ, while those living in Wales, Scotland and Northern Ireland reside in UKL, UKM and UKN respectively.

Then comes the first subdivision of the Regions, or NUTS2.   While Northern Ireland remains one NUTS2, Wales now has two and Scotland, which believed it could be an independent country within the European Union, now consists of four NUTS2 subdivisions. The nine regions of what was England now consist of 30 NUTS2.   There is yet one more sub-division:  NUTS3. These consist of five groups of districts in Northern Ireland, 23 Groups of unitary authorities or LECs in Scotland, 12 groups of Unitary  Authorities or groups of districts in the nine regions of England.

Of course the United Kingdom is not the only country to be divided in this way and there are now approximately 264 Regions (NUTS1) covering all the countries which make up the European Union. To take one instance, currently there are 13 such Regions in Greece. Their personnel are appointed by the Greek government and the duties of each Region is a miniature of the duties of the central government. In 2008 the current Greek government announced its plans (as per EU directives) to reduce the number of Regions from 13 to five,  the number of prefectures from 52 to 16 and the number of municipalities from 1050 to 350.   In the meantime came the financial crisis and these plans were shelved but not abandoned.

In addition, there are approximately 110 organisations known as Euroregions or inter-regions which cross national borders and belong to the Association of European Border Regions. These are said to be for cross-border co-operation in various fields including the promotion of trade links, cultural ties, transport policies, tourism, education and spatial development. However, the term ‘Euroregion’ does not always clearly show the differences in aims and objectives, if they exist at all, compared with other trans-frontier structures which are given different names such as Euregios, Border Regions or Working Communities. Many of the newly established Euroregions in the central and eastern European countries seem to be in fact, simply communities of interest which are forums for informal trans-frontier information and consultation.   Moreover, the legal frameworks within which the Euroregions operate exhibit such a wide variety of forms that it is difficult to clearly associate one particular legal framework with the term ‘Euroregion’.

The first inter-region, called ‘Euregio’ which took in parts of Germany and the Netherlands, was created by Germany in 1958 to ensure, it stated, that national borders should not be a barrier to the integration of Europe.   Although several of these date back to the 1960s, it was the 1990s which saw the largest increase in cross-border regions all over Europe.   In fact today there are virtually no local or regional authorities in border areas which are not somehow involved in inter-regional co-operation initiatives.

Nor do these inter-regions stop at the borders of the current European Union. Turkey, which has yet to be formally accepted as a member of the EU, nevertheless has extensive inter-regional programmes linking it with Greece.  Switzerland with its substantial banking sector and Norway with its huge resources of oil, are both particular targets in spite of the fact that they, too, are currently outside the EU.   For instance, the Nordic Council, which comprises Norway, Sweden, Finland and Denmark, gets EU grants for all of its eight Euroregions and the EU says that it is necessary to include Switzerland so as to integrate it into European regional planning. According to the August 2009 Current Concerns, the English edition of the Swiss magazine Zeit-Fragen, largely unknown to the Swiss population (and certainly not voted for by them), this most democratic of countries is being split into three huge Metropolitan Areas  --  Zurich, Geneva and Basel  --  ready to act as ‘European Motors’ and to play leading roles in Europe in a number of respects such as economic performance, decision-making, etc.

But of particular interest to us here in Britain is the fact that three of these Euroregions cross our borders:  the Arc Manche, the Atlantic Region and the North Sea Region.
The Arc Manche was originally set up in 1966.   It currently includes the French areas of Brittany, Nord-pas de Calais, Lower Normandy, Upper Normandy and Picardy together with the English counties of Dorset, Hampshire, the Isle of Wight, Kent, and West and East Sussex.  It has created its own forums for conferences, etc. and on 12th October 2005, members of Arc Manche met in Brighton to create the Channel Arc Manche Assembly.   Inter-regional Assemblies, where they exist, usually consist of regional heads of governments, commissions of executive officers, general secretariats and standing commissions on a wide range of issues. These officials are not elected by the general public.

At the first meeting of the Arc Manche Assembly, Alain Le Vern from the Upper Normandy region, was appointed President and Brad Watson, from the West Sussex County Council, was appointed Vice President.

The North Sea Region was created in 2007 and links areas of six countries bordering the North Sea: Norway (which is outside of the EU), Sweden, Denmark, Germany, Belgium, and the Netherlands and the whole eastern side of the UK.

The Atlantic Region, which was possibly created in 2008, takes in the west of Scotland, Wales, Cornwall and Devon, Northern Ireland and Eire, plus parts of south-western France, Spain and Portugal.

There seems to be no information yet about Assemblies for the North Sea or Atlantic Euroregions but it is certain that none of the three will be based in the United Kingdom.   The Arc Manche Region will be run from France, the Atlantic Region from Portugal and the North Sea Region from Denmark.   All three now have legal status and receive large grants from the central funds of the EU (which, of course, includes British taxpayers’ money).   Between 2007 and 2013, the Arc Manche Region will receive an annual budget of £261 million, the Atlantic Region £127 million and the North Sea Region £219 million.

In other words, the EU is busy knitting the various nations so tightly together, destroying both local and national loyalty, that it will be difficult to unpick them and retrieve our countries should we ever wish to leave the European Union.
And that’s the idea." 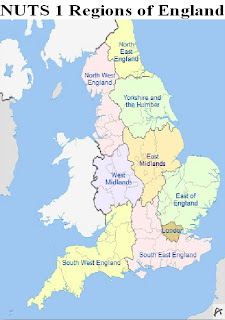 Tip of the beret to author Sonia Porter for the explanation.

Anyone who thinks that peaceful protest is going to prise the Eurocrats fingers from the Uk's throat is being wilfully ignorant.

Their whole scam has always been to enmesh the European countries in a web which cannot be unravelled. There are only 3 possible outcomes:

1. The project collapses under its own corruption and debt.
2. The project succeeds in becoming that which it always was meant to be i.e. a federal superstate.
3. The people of Europe rise up and slaughter every single Europhile of whatever gender, race, colour and creed.

Now, which do you really see as the most likely? Hint, it's not number 3.

O/T but considering your on/off stance regarding voting No consent to be governed?

Thank you for the link.

They can kiss my arse.

How very interesting, and unsurprising. See, when they first came out with the IER idea they were saying that registration would be down to individual choice. There would actually be an opt-out.

Lots of data matching will be going on:

"It is now our intention that the names and addresses of all individuals currently on an electoral register will be matched against the data held by public bodies such as the DWP and local authorities themselves. If an elector’s information can be matched, the individual will be automatically placed onto the new IER register and would not need to take any further action to be registered under IER. Only those people who cannot be confirmed automatically will be invited to provide identifying information to be verified."

And here is the bill as it currently stands:

The penalties will be detailed in their favoured method of doing things without anyone noticing: a Statutory Instrument.

They get more insane by the day, these people, overriding their own rules at every turn in their desperation and petulance.

Completely unworkable unless they seriously think they will be able to fine the several millions who have never registered and will never register, irrespective of any freedom/sovereign/LR/etc path that exists or any stupidity that comes out of parliament.

The above briefing paper actually says there are between 6 million and 8.5 million unregistered. :-D

Thanks for the links TSL.

Now, how do we persuade the other 30 million to unregister?

This is how I see it, if you are not registered, you have not given your consent to be governed....how the fuck can they fine you ?. What if you have written to them and told them also ?.....cunts !
Del

I have told all of them.

They do what they do best: ignore the proles and carry on regardless.

They need to be punished for that.

Bollocks to them all. I am getting to the end of my tether, when the rope breaks you will find me feverishly tying nooses with it - 650 of the buggers.