I promised our Antipodean pal that I would make this my first post of 2011.

I am pretty pleased that I waited a couple of days. My office (which is situated about 10 yards from the house) was in a right old state and something drastic needed to be done. Mrs Ranty chipped in and we spent all day tidying it up.

This is the result. 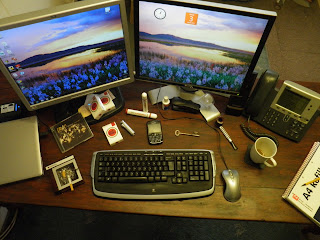 The contents of my desk are tame compared to a couple of days ago. The objects you can see are as follows:

1. Two monitors (one is used almost exclusively for video conferencing and the other is used for viewing/manipulating documents during the call).

5. Standard mouse (I got sick and tired of changing the batteries).

6. Two Romeo y Julieta cigar tubes (one is empty, the other has a cigar inside. They are shite, BTW).

12. Dunhill ashtray (Nicked from a hotel somewhere in Africa)

13. Coffee cup (most important item on the desk, apart from the Luckies).

14. Laptop and docking station (Although I think they are now called port replicators).

Around the room I have some other stuff but couldn't fit it all in the photo. A quick glance reveals masks from Asia and Africa, a pair of binoculars, a Silva compass, a home-made walking stick, a certificate for parachuting, a certificate for completing a 40 mile yomp over what the army describe as "undulating terrain", a shisha pipe, six or seven small (but odd) musical instruments from around the world, a desert rose from the Sahara, a rock that looks like a fossilised dog-turd (also from the Sahara), a box of 50 King Edward cigars, books on various languages (Arabic, French and Italian), my army dog-tags and a native American dreamcatcher. Oh, and an empty wine bottle.

Pretty dull really. I can confirm that I did have a tape measure on the desk pre-tidy up.

I will tag Ian and our new pal from across the pond, Christopher.

CR, I will accept your tag.. but as you, it needs tidying first...

My tidying up was entirely coincidental....

Lucky Strikes? How cosmopolitan of you.

Your computer screen looks surprisingly uncluttered whereas mine is full to busting with folders and icons.

Have a great new year, same to Mrs Ranty and your offspring. Although the new year has gotten off to a bad start with Spain falling to the smoking Taliban which will no doubt have our own smoking fascists rubbing their hands in glee and pushing the numpties that govern us to bring in even more draconian measures.

Thanks John. Best wishes to you and Mrs Yin as well. God knows you deserve a good year.

I bring back all sorts from abroad. Luckies if I can get them, Camel if I can't, but sometimes Rothmans and from Libya, a smoke called MS. I despise paying duty to the UK goverment and cannot remember when I last bought a packet of cigarettes here.

I had to spend ten minutes tidying up my desktop as well. There were around twenty folders visible but they are tagged with customer names so I needed to park those somewhere out of sight.

The neatness lasted less than an hour. I now have two roller blinds, masking tape, a hammer and two screwdrivers littering the desk.

Don't fret too much about the smoking ban. It will be the least of our problems soon.

"The neatness lasted less than an hour" Hehehe, it took that long?

I can be a maudlin bastard sometimes when I get into "the world is on my shoulders" mode, usually after a drink or two, but snap out of it when I realise that I have it good, no health worries to speak of, eat well and have a roof over my head, a few bob in the bank to see off any financial brick bats that come my way and a wife that loves me. What more do I need?

Keep up the good fight CR, it's always bolstering when you know that others are fighting your corner.

Oh, sure, it just happened to need a bit of a tidy, and then an hour after the photo it's back to it's glorious natural state. I tidied mine after posting what an embarrassing state it was in. :-)

Oh, and BTW, if you want to go back to a wireless mouse try lithium batteries in it. I used to replace ordinary AAs every four months or so and I've now had a pair of Li AAs that have lasted more than twice that, are still reading near as dammit 100% and the mouse software thinks will be good for another four years. Even assuming that's wildly optimistic and they go in two years they're still cheaper than the 8 or 9 pairs of regular Duracells I'd have used instead.

Tipp? Ex? I hope you dont use it on the screen.

Ah I see Mrs CR has the Scottish habit of ensuring your surroundings are tidied and polished enough to endanger the veneers.

If nothing else, this meme has forced some into doing something about the junk that we accumulate yet promise to deal with 'tomorrow'.