Yemenis Protest-But They Stop At Noon

To go and chew qat.

Perhaps there is a lesson here for western governments?

Upset the slaves by all means, but in order to quell dissent, simply legalise a mild narcotic. Job done.

When I first visited Sana'a, I thought everyone was disfigured. They all had one cheek grossly distended. These poor, poor people, I thought. Is there nothing the doctors can do for this odd disfiguration? Then my driver told me that they weren't disfigured, they were chewing qat. He offered me a wad but I politely turned him down. I had him take me back to the hotel bar where I got pleasantly pissed on gin & tonic. I smoked like a chimney whilst listening to a Yemeni murder songs in nine different languages. My ears bled. 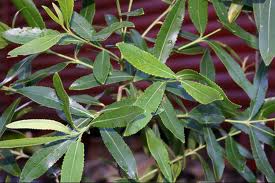 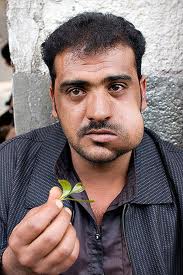 The whole story can be found here.

"I'm going to the souk right now to buy qat. I'll have lunch, and then I'll chew qat with friends," said Ahmed Saleh, as he left an opposition protest. "In Yemen, people protest in the morning, but in the afternoon they go to chew qat."

Well Ahmed, you and your countrymen are going to have to make a decision: get some real protesting done or be stuck with the guy in the big palace. I've seen his house and like Ben Ali, like Mubarak, and like all other dictators, he ain't movin' until you guys get your act together.

Leave the qat alone for a couple of weeks and win your country back.

If the qat rules you absolutely, it doesn't matter what the boss is doing, does it?

Aye, but we can switch the telly off.

Are they putting something in the water?

Lot of qat's in your posts Captain,is this becoming a single issue blog lol!

Or White Lightning in the UK.

I was actually considering a title with qat in it, but they were all shite, and it looked like I was milking the theme a bit...:)

There may be some truth in the fluoride rumour (that it lodges in your pituitary gland and affects your brain), but they don't do that up here. And we still have a supine nation.

No doubt "the boss" makes sure quat supplies are never interrupted.

Keep the poor buggers doped up.

With all that shite hitting their eyes and their bellies, who has the gumption to revolt?

Not many, is the sad answer.

For anyone who cares, the active compound in qat/khat is called cathinone. Its derivatives are a class called substituted cathinones which include methcathinone, mephedrone (MCAT) and methylenedioxypyrovalerone (MDPV), all of which were legal highs - and not shown to be harmful - until they were banned by the government in its infinite wisdom.

By the way, the Misuse of Drugs Act actually makes it illegal to be alive. There's a few substances classified that are naturally produced by the human body, including one class A drug, dimethyltryptamine, that's believed to be connected to dreaming. The body is even believed to produce small amounts of heroin.

Oh, and those endorphins that're produced when you exercise? Short for "endogenous morphine".

Meanwhile, alcohol and tobacco, two of the most harmful drugs in existence, are still used regularly. Hmm.

I think our govamunt will drop the minimum pricing for alcohol proposals. Can't have the population sobering up. They might realise what's going on and do an Egyptian.