The Show Must Go On

And I was wondering what we could expect.

The answer, depressingly, is 'more of the same'.

Television shows will get worse. More faux 'celebrities' will be foisted upon us. It will be yet another Tsunami of Twats this year. It gets worse every year and the public, those shallow, shallow people, will lap it up. And why not? In the 'real' world, politicians lie, doctors hurt people, the clergy interferes with little kids, policemen steal, and scientists publish whatever shite they are told to, in order to pay their mortgages. It is far, far safer to disbelieve all those who we previously had an ounce of respect for. Better to sit glued to TOWIE and pretend that all is well. Better to phone in your support of the non-entities in talent shows, or watch celebrities in a jungle or on a dance floor or locked up in a TV house.

Although they are called reality shows, they are anything but. Life is mostly stage-managed, and these shows certainly are. But we don't like being told that. The truth really does hurt. It hurts to think about it, and it hurts to find out you are no more than a pawn in the game of life. No. Reality bites. We delude ourselves. Intentionally.

The average human being makes 4,334 decisions every single day. One decision most people make is NOT to find out more, not to dig deeper, not to find out what is real and what is fake. Some decide to remain in whatever reality is the most comfortable for them. Most decide that the path of least resistance is a fine choice.

Reality is learning that you live in a deception. That deception involves trotting to the polls once every Preston Guild to elect the least worst numpty on a staggeringly short list.

Reality is learning that those who run the nation are not those you voted for but a shifty, shiftless lot who steer these newbies, these wannabe 'lawmakers'. The civil servants (now there's a misnomer for you) who are neither civil nor servile, who direct, who shape, who drive and who compel the MPs (who they view as 'transients) to do their bidding. The mandarins in Whitehall are ever present. They are unelected, yet they run the place as if it were their own. They are constant. The security services (MI5/MI6), the politically driven ACPO, and a thousand other departments keep us steered towards whatever it is they see as Britain's future. They conspire, these agents, to keep us terrified, to keep us observed, to keep us complacent, so that we pay our taxes without complaint. So that we toe the line.

Reality is understanding, and accepting, that the UK operates a two-tier law system. If you doubt that, look up Lord Ahmed, the Labour peer who was sentenced to 12 weeks for dangerous driving in which Martyn Gombar died. Ahmed served one night in HMP Marshgate and the next morning he was driven to Moorlands Open Prison where he served a further 15 days. Contrast that with the London rioter gaoled for 16 months for stealing a bottle of water.

Reality is knowing that we have been locked into a bitter marriage with the European Union for exactly 40 years today and that most of those in the Westminster/Whitehall bubble will fight tooth & nail to keep us in that deteriorating relationship. Cameron, he of the 'cast-iron' promise, will, this month, set out his vision for Europe. He will lie to our faces by saying we must look at the relationship and tweak the nature of our membership of Le Club Stupide but essentially, we will not be permitted to divorce the chav we married.

Some think we should celebrate. I'll let this image speak for me: 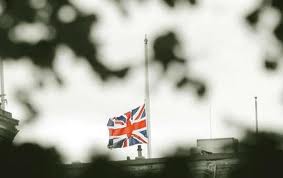 Reality is understanding that we are a wealthy nation. Having traveled extensively to third world countries I know the difference between real poverty and the perceived notion of poverty we delude ourselves with here. Not many people starve to death here. There is a system in place to help those in shitty circumstances and we (taxpayers) chip in for that safety net. Emergency housing is made available, emergency payments can be made, and medical help is on tap. All of these things are, inevitably, abused, but that is a fact of life. If you have a home, with electricity and running water, you are in a remarkably good position. Billions around the world have no such luxury.

Reality is understanding that if you are a taxpayer, you are being robbed, every month, to pay for an incredible range of crap. In 2012 we learnt that most working people will be parted from 73% of their income either directly or indirectly, to support a succession of out-of-touch and inept governments. They only have one tool in the box: the hammer. And as someone infinitely more wise than I once said. "If you only have a hammer, you tend to see every problem as a nail". Tax and ban. The watchwords of every government for decades now. And that 73% still isn't enough. They will take more. And more. And more.

Reality is understanding your place in the world, and redefining it. You have no idea quite how powerful you are. I tried to explain this before in a piece called The Hierarchy and it is still widely read to this day. I would urge you to re-read it and act accordingly. The crap doesn't stop, in fact it gets a little more intense, but government agents do back off when they know that know what you aren't supposed to know.

YOU need to be an agent of change.

Because sure as eggs are eggs, if things don't change, they will stay the same.

It's mainly thanks to EU freedom of movement that I am now able to escape shithole GB and it's moronic sheeple to a much nicer place.
You are wasting your time expecting brits who call their wives "SWMBO" to stand up to any Nanny. They are a bunch of limp girl's blouses and utterly deserve to be dominated.

With talents such as yours, Cap'n, we will be free again.

I have had several offers to relocate in the last couple of years. Options were/are: Germany, Switzerland, Cyprus, Dubai, or an African nation of my own choosing.

I decided to stay and fight. I think my countrymen need some of us to resist. It may be to no avail but I will die knowing I tried.

No grudges against those who do leave. It is an individual choice.

I have a burning desire to straighten my back and look the world in the eye. No-one is better than me or more important than me.

Time we all realised that.

Mr. Ranty, Sir. Your words, I believe, are some of the most important I have ever read. Thanks for keeping me thinking.

I have every HOPE FOR THE FUTURE.
since becoming acquainted with
ANONYMOUS,
I see an upsurge of positive thinking
among many many people.

ANONYMOUS [a Meme] is not just a group of Hackers but a very divergent group of liberals, freemen, et al.

Well I tried my bit and I'm not even British. Now I'm off abroad.

I kept saying that protests don't work because they are held in the wrong places. What's the point in plonkers travelling to London when the MPs stay at home and hide?!
Protests should quite legally be held outside your local MP's house. Makes an impression and makes it nice and personal!
He/she's the POS that's supposed to represent you and doesn't!
Imagine plod trying to be at 650 local protests simultaneously. Theoretically overall turnout could also be much higher than big city protests that people don't bother to travel to.

trotting to the polls once every Preston Guild to elect the least worst numpty on a staggeringly short list.

I know this is a serious subject but that line cracked me up. So true.

"Reality is understanding your place in the world, and redefining it. You have no idea quite how powerful you are."

And most never will simply because from birth onwards they are conditioned by a system created for the sole purpose to control.
As I've continually stated, the people are the people's biggest enemy and NOT the elites as we are continually reminded of by many within the 'truth' movement.

However, these people who make up the shield (the overwhelming public and majority) have been manipulated by the elites through not just massive indoctrination via their system of control (MSM, Education etc) but by debt, by the creation of money that they then use to hammer these people back into the ground. And they willingly comply.

I was asked why I didn't go into close protection security (CPS) to which I simply stated that those who have CPS are the very people that need a bullet in the head. I said that I would most certainly not protect society's slavers. By that concise reply, I have said no, a reply that sadly 99% of people would not make. Why? Well, because materialism has been shoved down their throats constantly, not forgetting their mass ignorance to what's really going on, they will gladly oblige, especially when one realises that CPS, especially in warzones, can net individuals thousands of pounds a week, if not a day. It's something you having been in the armed forces will testify too. Add to that debt and it's a dream come true for your average 'yoot' brought up on Call of Duty, Medal of Honour and other violent war video games, who have been carefully desensitised by an industry heavily infiltrated by the weapons-military complex.

The first step for people knowing their place in this world and of course how powerful they are is not through becoming a demigod at MMA or/and PS3/XBox video games, but instead to educate themselves on reality, which means going into a period of great transition, becoming a social pariah and realising that the reality you live within is a false one. People are not prepared to make that sacrifice and many end up like the bald guy in the Matrix being plugged back in because the reality he's living although the real one, is hell compared to the lie he previously inhabited.

Cap'n, things won't change. The control that is upon society is absolutely massive. And I hate to break it to 'Highland Cooncil', but Anonymous, like Wikileaks is nothing but controlled opposition, giving people the impression that there are organisations out there fighting for their liberty and freedom. Hegelian dialectic unfortunately.

off topic,thought this might be of interest to you guys - that documentary about a certain fatal car crash us Brits aren't allowed to see uncensored..I don't expect it to be up for much longer so watch it while you can

The story has been "done to death" but it is curious that the contempt of court thing is still in place - I'd guess it's easy to provoke the judges - and convenient publicity to be banned with a whopper conspiracy theory - but still, as Keith Allen volunteers - prancing around in tights coughing and spitting in movieland pays better and is considerably less hassle...

5 mins max from the emergency room and they take 1h45m? If that happened to Ethel Bloggs on the Hyde Park Corner underpass you'd never hear the last of it - hmmm....

Reality is what you make it... unless you let others make it for you in which case your reality is actually their fantasy... so that's everyone who believes politics has the answers.

Again we think along similar lines.