This is a difficult time for those of us in Lawful Rebellion.

Everywhere I look I see Union Flags, everything I read is an example of just how grovelling Britons can be when they try. Previously unpatriotic people are wetting themselves with excitement at the prospect of Brenda gadding about the place.

Look at this for instance.

I pop along to Cranmer fairly regularly, and most of the time, the old dead archbishop is right on the money. Not this time. So I got to wondering if people just see what they want to see, no matter that the evidence, the easily locatable evidence, tells them otherwise.

CORRECTION: I did not read one of the paragraphs at Cranmer's. He does indeed point out the treason. My apologies to His Grace.

I appreciate that I come across as a miserable git when I point out the obvious to people: she has breached her contract with the people. She is in error. She has committed treason. Thousands of times.

Mired in ignorance of that fact, again, easily proved, the great unwashed will wave millions of plastic flags at this nice old lady in a fancy carriage. They will hold street parties, and some will remember the good old days. Not one of them however, will even question her right to reign. No-one will take five minutes to connect the dots. No-one will bother to count how many pieces of EU legislation she (or more accurately, her "favourite cousins") have rubber-stamped. No-one will want to look at the bigger picture. Too complex. Too messy. Sounds like a conspiracy. Nothing to be gained there. 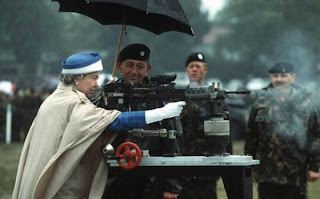 "Now then, where's that bastard Ranty?"


As I said on Cranmer, I am very pleased that communities will gather, and they will have a great time. Her from number 17 will meet her from number 19, probably for the first time ever. They will sing, the kids will play, the adults may have a drinky or two, and that is a wonderful thing.

But none of them will stop to ask themselves, "Has she really done right by us since her Coronation in 1953?".

She has not. She has let all of us down. She gave us away to the EU. That is an indisputable, solid-gold fact.

I know that. I even think I know why.

But will there be bunting at Ranty Barracks?

If the situation were different, if we still had a monarch, yes. Absolutely. I quite like the theory of our tri-partite system of government and rule.

Sadly, there will be no bunting here.

It's really the biggest con of all. Getting everyone to celebrate a Queen that sold her citizens rights and freedoms to a fucking foreigner.

Watching all these people waving flags for someone who at best did jack shit while British liberties were given away, and at worst was complicit in wrapping them up and handing them over... it's just so bloody depressing.

Forgive them, AE, for they know not what they do.

30 years of shite on telly and shite in the papers will fog the brightest minds.

Isnt the Monarch supposed to protect the people by stepping in and telling an out of control government to fuck orf.I havnt seen any hint of this and therefore as far as I am concerned she is a traitor complicit in selling us all down the river.
She had her chance to protect our freedoms and rights but instead stood back and did nothing and for that I cannot forgive her.Is it any coincidence that during her reign the country has gone from a
global power that values individual freedom and liberty to
a third world police state shithole.History will not look favourably on the second Elizabethan era.

But what she swore to do, and what she actually did, are leagues apart.

She ignores us at her peril.

She gave the Royal Assent to every Act that cedes power to the European Union. Without it we wouldn't even be in the 'Common Market' (re: goods and services)and could have continued as a global trading nation without 'let or hinderance' from fanatical EU rules and regulations.

She knew the 'terms and conditions' of Her role as monarch so don't be fooled by those who say She was hoodwinked by an unscrupulous Privy Council, she wasn't. She sold us out and to prove it look no further than what She does to the mail She receives on the matter - she forwards it to the FCO.

However for my money the worst of it is the racialization of my homeland, England. She warned of nationalism in Her Christmas broadcast and I'd like to remind Her that without it we would never have defeated the Nazis, let alone built a civilization. She stands as possibly the weakest monarch we've ever had so She deserves the title of EU citizen.

Her reign will be recorded as the period when the four nations of the United Kingdom were reduced to regions and their historic peoples abandoned to their fate as minorities in their own lands. And they want us to celebrate 60 years of this bullshit.

But you do not need to capitalise the "h" in her.

She is exactly the same as you and me: she is a mere citizen of the EU super-state.

Thanks CR, the 'H' and 'S' is out of habit - I took the oath when I served. Makes it all the harder to criticize someone you swore to defend. She broke it, not me, I did my job.

I signed on for 6 years, but I ended up serving for 27 years.

Sneaky buggers didn't let me go until I reached 45.

All behind me now. Revoking my allegiance was tough but necessary.

i think you may have your dates confused captain!

you worked as a contractor for BP in 1989 so you couldn't have done 27 years, it appears you did your 6 and then got out.

perhaps it seemed that long

Don't you ever tire of getting your facts wrong?

Do me a favour will you?

Lynn??
Epic fail.
Now Fuck off beneath your bridge!

I'm shoving all his comments in the spam folder Nick.

His M.O is still the same: he gets his facts wrong then starts threatening. I am not putting up with all that again.

Easier if he just stayed away. Forever.

No worries Capt.
I know how he came to the name Lynn and he managed to fuck that up. If he wants to resort to empty threats, however veiled, he needs to realise that they will have consequences!