My alternative title was "Worthless Coppers?" but I thought you'd think I was ranting about plod again.

Have a look at these two 2p pieces: 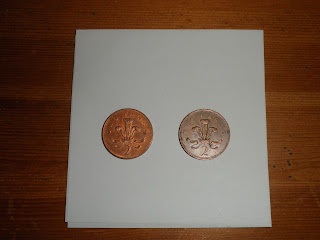 Righty is worth more as scrap metal than it is as currency.

Incidentally, £5, £10, £20, £50 and £100 notes have an intrinsic value of around 4p. Banknotes issued by Scottish and Northern Ireland banks are not legal tender* in England & Wales and they can be refused as payment for goods and services. Thanks to our friends Yin & Yang, English notes are not legal tender north of the border either. (Thanks to PJH for letting us know in the comments).

Talking of Scottish bank notes, I love it when reading angry letters in the paper, (usually the Daily Record), from mong Jocks because their Scottish fiver was refused when they were south of the border.

Makes me proud to be Scottish.

I may not be a mong Jock but it pisses me off when they refuse the notes.

Nowadays I wait until I am in Englandshire before getting the cash I need from the hole in the wall.

I'm going to have to get a second coppers jar now to sort out the real coppers from the new. Over 50% return on investment doesn't look bad to me.

Thing is, you would have to melt them down.

They have a rule against that.....

Interesting stuff CR. I think it is called bad money driving out good. I can remember when our silver coins had silver in them. It is the same trick the earliest money changers sitting outside the temples pulled.

CR, It may say in WIKI (Phut phut) that Scots notes are not tender however I use this when I need to spend them -"You COULD refuse them, but SHOULD you. The Scots note is backed by STERLING and the english notes are backed by 'NOTHING'. The Scots notes are actually worth something. Read the note.
They usually take it after that.
And
The coinage can be melted down the law RE defacing the monarch was repealed.
So go for it.

The problem is that less than 3% of currency is in circulation. The rest is just digits in a bank account. It will all go, eventually.

Then we are truly fucked.

(I know that we should never trust Wiki. On anything).

It should also be noted that BoE banknotes are not legal tender in Scotland and N.I.

Twisted Root: "I think it is called bad money driving out good"

I believe it's called debasement of currency.
It is what happens when civilisations start to decline.
We are already past that point the bough breaks soon I fear.

"Nero and other emperors debased the currency in order to supply a demand for more coins. By debasing the currency is meant that instead of a coin having its own intrinsic value+, it was now only representative of the silver or gold it had once contained. By the time of Claudius II Gothicus (268-270 A.D.) the amount of silver in a supposedly (100%) silver denarius was only .02%.
This led to or was severe inflation, depending on how you define inflation".

I was handed a featherweight coin today in my change at Waitrose. On closer examination it turned out to be a 50p piece issued to celebrate the London Olymics.
Presumably the reduced content of the coin is being used to help pay for the Games, the cost of which must now be around 400% up on the original estimate.

I've never had a problem using Scotch money in England. Most people don't even bat an eyelid. Throughout Europe before the days of the euro, I rarely used to change money, even in bars. Used to ask "You take English money?" and apart from some hick town in the middle of nowhere I can't recall ever bing refused.

When I used to live in Orkney, I used to do a bit of work for a local farmer. His party piece used to be the Braveheart bit, and hating the English. All good fun and done in jest. I used to make a point of being asking to be paid in English money as that micky mouse Scotch stuff waqs worthless anywhere else.

That said, try changing Scotch money abroad, and they look at you like you're trying to pass off Rupees or something.

Thank you for providing some balance.

I was not aware of that.

The copper prices used were based on 2006 prices. No doubt my old 2p is worth more.

Thank you for that.

And here's me thinking that the scam is relatively new....

Naivete. It's a curse!

No doubt it will go up and up. We will keep forking out, and grinning like the village idiot.

I went to Thailand once. (For workytime, not for sexytime).

I had £500 that I wanted to change into Baht. The wifey at the counter looked at my Scotch dosh and said "Ret me see what late I can give you".

"Wait, wait!", she screeches, I give you same as Engrish".

"Too fuckin light you wirr," says I.

Yes that's it. Ta for that.

Received a 1p coin the other day that is rather suspect. It has the look of a EU coin in colour and is very lightweight. It's all about the colour, we are being conditioned to accept the new EU coinage, slowly, slowly catch a monkey.

I also received a £50 note, these are being taken out of circulation shortly - notice has been given, I am advised.

AND the most forged element in our currency, to date (prolific), is the £1 coin.

lmao @ worthless coppers :D Would have worked too if they wern't worth more than the notes :P

I'm just glad that I bought silver for a while (and one gold sovereign).

Anyway, a story...when I was married and we were holidaying in Portugal, I tried to explain to my young stepdaughter that it was a bad idea for the Euro coins to be so similar in size and shape. How would a blind person tell a one euro coin from a two euro coin, for example?

She thought about it for a while and said "Yes, but they'd probably walk into the wrong shop anyway".

I laughed so much that I almost had had an asthma attack.

Rob F, Your step daughter isn't advising the central government by any chance is she.
If NOT I believe there is a position going and she would fit the bill.

All very well the old coins being worth more than the newer.

Whichever way you look at it, its equal.

Its just a circular conundrum.

The true value of any currency is in sweat equity, none other and the only ones to gain are those in control of it.

I beg to argue over the intrinsic value of our notes (4p) - I reckon they're worth fcuk all.

Banknotes issued by Scottish and Northern Ireland banks are not legal tender* in England & Wales and they can be refused as payment for goods and services.

That's interesting because we always accept Scottish and the bank has verified that it is acceptable currency in England. I did refuse one and was soon corrected on it.

... we always accept Scottish and the bank has verified that it is acceptable currency in England.

I thought legal tender just meant you had to accept it if someone offers it, while taking anything else from Scottish poonds to US dollars to Flanian Pobble Beads and the Triganic Pu is optional. It may be an acceptable currency to the person receiving it, but there's no law saying they must take it. Scottish notes have the advantage of being the same currency and being accepted by all the banks, so there's really no reason not to take them. On the other hand the downside is not being able to offer a shit exchange rate, as was the practice at one place I worked in years ago which accepted all major currencies for the 'convenience of their customers'.

@James - "Legal Tender" has a very narrow definition. From my link above regarding BoE notes:

"Both parties are free to agree to accept any form of payment whether legal tender or otherwise according to their wishes."

Not a lot of people know this, but Scottish banknotes aren't legal tender anywhere, not even in Scotland.

"Scottish banknotes aren't legal tender anywhere, not even in Scotland."

Neither are cheques and credit/debit cards.

As I said earlier, 'legal tender' is a very narrow legal definition.

I had an English £5 note refused in the Co-op a month ago. I hadn't realised that it was an 'old' note, which I had got in change from another shop. The checkout lady showed me a new one that was almost identical apart from some symbols printed on one side. She said you could get it 'changed' at the bank. Tried 2 banks and both told me that without an account at the bank they couldn't change it. Had to wait til the next time I visited the bank to get it changed. And it confused the cashier and she had to check with the Manager before I was 'allowed' a real £5 note in exchange.

Why do we put any value on a piece of paper that we can't even use in exchange for goods in the shops?

It's not our money, it's theirs!