I do not usually have a kind thought in my head for the money-grabbing power-hungry unspeakable monster that you are, but today, whilst thinking about you, I was happy. You are an abomination. You are unelected, unaccountable, and unable to recognise your own sheer incompetence. In everything. At all times.

I am happy because you are finally dying. After dozens of transfusions of our cash, we, the once-wealthier, have realised that all the transfusions in the world will not reanimate your worthless, pox-ridden, stinking body. You don't know it yet but your end is near, and for that, I am spectacularly grateful. It is time for you to lay down and die. It is time for you to be gone from our sight.

When you look at this: 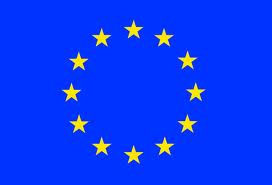 You see unity. You see some Utopian dream of 27 utterly different peoples uniting in a forced love-fest. This unity exists only in your tiny, undeveloped minds. The experiment has failed. The Fourth Reich will not be taking command in the way you imagined it would. You coerced, you threatened, you cajoled, you conned, and you stole. Despite that monumental stupidity, unique to you and all of your brain-dead supporters, the jig is up.

You should understand that when we look at the EU flag, we see this: 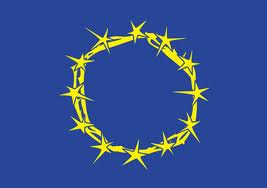 Not freedom, just more slavery. More of the same. More of our continued existence as cash-cows for your pet projects. The only thing you do excel at is wasting our money. Trouble is, Herman and Co, we already have a government hell-bent on stealing as much as they can from us. You are a leech upon a leech. Is there a lower life-form on the planet? I seriously doubt it.

NEWSFLASH: We don't want you anymore. We have had quite enough.

You crossed a line. I was giving up, to be honest. I thought the beast that you abuse so, so badly would never wake up. It did. It is angry, and it has focused a bloodshot eye on you. If I were you, I would tremble. I would run and I would hide. I would be terrified to know that millions of people were coming back for the money, for the freedoms, and for the very sovereignty you stole from them.


So you can take your precious flag and do this: 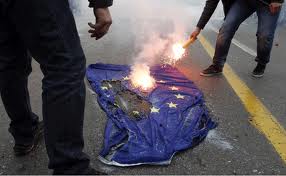 It will save us the trouble of rooting them all out and doing it for you.

Now, how many times have I wronged ye? Let us count the ways:

1. I insulted you. Several times.

2. I criticised you. Several times.

3. I posted altered images of your precious piece of material.

5. I dared to make the (rational) connection with the EU and Hitlers Dream.

How many of your inane "laws" did I violate there? Enough to ruffle your comb-over? Enough for you to dispatch a snatch squad of EuroPol goons?

Come and get me.

I duly swear an Oath here today that I will resist you until you are dead and buried in an unmarked grave. I will never forgive you for the harm you, Ma Windsor, and countless, spineless, traitorous British MPs did to my nation.

Nor will I ever forget.

Over 140 delegates from across Europe will be arriving in Inverness next week to take part in a conference looking at ways European destinations can promote the growth of sustainable tourism in mountain areas.

Although the conference is now fully booked, anyone wishing to find out more about the work of Euromontana can visit their website www.euromontana.org

Errrmm, I think you missed something out, Ranty old chap. How about

6.Thou shalt not take the name of the Lord thy God in vain?

If thats an open letter, please feel free to add my name as a signatory.

Yep, think that sums it up nicely. Shall scurry off and add the link now.

Very well put, CR. These cunts are ticks on leeches. We need them gone and we need them gone like yesterday by whatever means but preferably something suitably unpleasant. They are vermin; they are scum. Their leader is a Satan-worshipping paedophile and we have to pay him and his cronies for the privilege of having all our ancient rights and freedoms dismantled piecemeal. We have to pay their handsome salaries and expenses whilst they go about their business of wrecking our lives. It cannot be allowed to continue. Bring on the revolution!

I do solemly swear and make oath that I shall resist the EUSSR with every fibre off my being untill it is dying gurgling its own frothy blood from its clenched toothed lips and swept back into the sea where it belongs...and then we will fill in the feckin chunnel as well...bastards, with you all the way Cap'n!

We are suffering all this grief and countless billions spunked away 'cos that fat old poof Heath wanted the £35k Charlemagne prize. Probably spent it on K-Y gel.
Urban11

Superb, Cap'n. With you every step of the way.

And let the pensions of all the Eurocrats be paid in euros after the bloody thing collapses and is worth precisely fuck-all. In perpetuity.

I just love your post,and i wish that
i could put them all in a sack and dump
them in the north pole,but we have a hard
fight ahead the more power and positions
they get the worse it will get.
Kohls LITTLE GIRL WILL STOP AT NOTHING TO
SAVE HER LITTLE EUSSR,and a lot of other
Euro freaks are with her and to them the Eussr is the brightest star in the sky,i just hope that it falls on their heads sooner than later.

The EU apparatchiks know that the experiment is doomed. How can they not see the majority hatred for what they are and what they stand for? It painted on the wall ffs. Literally.

I have a friend who works for the EU and he tells me he is getting afraid to admit who he works for when he is outside the safe EU compounds. The stories I have heard about corruption and nepotism and fraud.....nothing new but its the sheer scale of the pillaging that beggars belief.

I have no doubt that the clever ones are maintaining an image of normality while behind the scenes they are plundering and stealing everything they can get their grubby fucking hands on in anticipation of it all going tits up very quickly, very soon. That its going to implode and leave us all deep in the shit and with a huge political vaccuum to be filled is not in doubt.

Oh, there will be retribution for what these criminal bastards have done. Another re-run of the Nuremberg Trials anyone?

I'm going to put this on Digg. Love it C.R. and the commenters!