This is your opportunity to do a good a thing. It will also allow you to upset the nanny state.

The man pictured, Nick Hogan, allowed his customers to smoke in his pub. He was subsequently charged and taken to court repeatedly. He forked out around £50,000 of his own money to fight the nonsensical smoking ban in Britain. EVERYWHERE else in Europe retains a choice for their customers, but not here in Jackboot Britain. Here, their disgust for you smokers, and your tolerant non-smoking friends, is total.

They bankrupted him, and sent him to gaol for six fucking months. Lords who drive and text and kill people get released in 16 days. Women who steal £1 million from their employers walk out of court free. This sentence was pure spite wrapped in malice surrounded by vindictiveness. It has nothing to do with justice. This is the "Jackboot stamping in your face" that George Orwell wrote about in 1984. 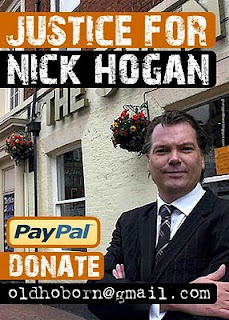 Your humble captain thanks you.
CR.
Scribbled by Captain Ranty at 10:48:00 am

I don't think France does. It's out in the rain for them, same as us, IINVMM (and I would like to be)

Only in the bigger cities Marv. Around the regions they simply ignore the ban.

AND they don't have our stupid "50% only enclosed" rule. They don't die of hypothermia in the same numbers we do.

I am still reeling from this CR and I am about to donate for my friend Nick Hogan, a man I have met more than a few times, a man that, if I were a drunkin' lout, would not mix with, (have you seen the size of him?)Yet he wouldn't put a blind man out of his pub because they smoked.

The donations will upset him a tad as he is making a political statment but he will not kick the donators in the teeth, he will be humbled by your support. If you cannot donate money then you can send him a letter or card to:

We are behind you Nick, do not forget that, no matter how we have treated you in the past.

The publicity when he is released will more than make up for his stance. I know he wanted to take this to the end. He has made his point and I think he is worth more on the outside.

The show of support from the bloggers and their readers has been fantastic.

The kick in the slats for nanny will be a joy to behold.

Corrected. That's where I stand.

It is VERY IMPORTANT that the support for this is registered and reported in the MSM though, otherwise it will be lost.

Holby has just announced that he will visit the gaol in full regalia.

That will generate some PR.

If I wasn't going back to Libya I'd head down there myself.

If it's a weekday, count me in.

CR the MSM doesn't give a flying f... for a man that stands up for his principles, they only want to know who's shagging who in the celeb columns. (Hell yeah, I want to know too but I don't shut off my brain to what is going on around me!)

Sheryl Cole? Who is she??? And Ashley Cole?

As you know I did time for a crime I DID COMMIT and I know what Nick is going through, taken from a courtroom to a holding cell whilst he awaits private transport to his place of incaraction.

I was held in Hull prison and was given the opportunity to be transfered to an open prison but the prison officer I first met talked me out of it. I was given advice from a 'care worker' that stood me in good stead, she told me to work, take a job, which I did.

I was jailed just before Christmans 1993. Come Christmas time I was sat down in the officers mess and fed a lavish Turkey dinner, there was wine on the table and cigarettes, and I was served by the prison officers themselves.

Because I was a non-violent prisoner that took a job I was given a key to my cell, I do hope that Nick is afforded the same.

There is one difference between me and Nick, I was a criminal, Nick is not.

I am writing my life story now, and it aint pretty.

Commit crime? Is that "broke law"? I have to get up early to fit them all in. I'd hate to miss one.

Although I haven't done any that have hurt anyone. Not yet.

I did 7 days pokey back in the day. I hope Nick is bearing up - I'm sure the Screws will go easy on him and the cons will love him for sure.

Perhaps OH should try to organise a massive smoke in. Pick some pubs near Parliament and all light up together.

Thank-you all for your support, it has been a fantastic response. I spoke to Denise Hogan again last night, and she is truly grateful.

As the good Captain Ranty has correctly sussed - Nick released early courtesy of the blogging community will be a far bigger story than Nick leaving jail at 8am in a cold wet drizzle observed by no one.

We are making our voices heard in a way I never believed possible and uniting all sides of the blogging community.

Blimey! The Third Estate linked to me this morning, wonders will never cease!

And Ranty? You do know that Nick wasn't on the premises when the last lot of inspectors walked in. He was fined for not preventing his customers from smoking and he wasn't even there......

Thank YOU Anna, for kicking it all off!

What a wonderful result. Bloggers and commenters have found common ground and are united in their disgust. I think this will throw a scare into the nannies. And I hope that this is only the beginning.

I did know Nick was off-site at the time. We have been talking to each other since 2007, although he would not recognise my new nom de guerre.

He has a big heart and I am extremely pleased that he has found so much support on the interweb. Nick will tell you himself, he has no time for this "malarkey". He is very much an action man. He leaves this sort of thing to us while he visits various conferences to whip up support.

Thanks again! Between you, Holby, and the rest of us, we will soon have the planet back on an even keel.

Captain, your old area of expertise serves you well here.