What Next For Alba?

Alex Salmond and the SNP have delivered a stunning win in Scotland.

I don't have all the figures to hand but I believe the Nats now have 69 seats in Holyrood. They needed 65 to form a majority government. Now that they have that majority, what happens next? 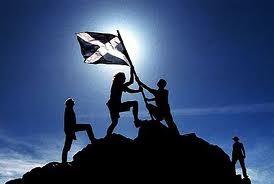 Whatever you may think of Wee Eck, he is a sharp politician. Will he offer a referendum on independence, or, more accurately, when will he offer a referendum? Only he has the answer to that but his party are shouting for one right now. They are riding the crest of a wave, and if you will permit mixed metaphors, they feel they need to strike while the iron is hot.

It is, of course, a double-edged sword: if they call a referendum early (as opposed to their pledge that one will be offered near the end of their term at Holyrood) they may fare better. BUT, if independence is rejected, there will not be another chance to ask the people for another generation at least.

My original "problem" with Scottish independence remains: I do not believe Scotland will be independent for long. With Scotland breaking away from the Union, all of the countries that make up the UK are automatically kicked out of the EU and must reapply. I have absolutely no doubt in my mind that the Nats would apply immediately, and this neuters their hard-fought battle for independence.

Can Ireland, Greece, Portugal, Spain, or any of the other 27 nations truly say they are independent? I think not.

Ireland (and the others) have lost control of any economic decisions they may have made. The EU Unelected and Unaccountable tell them what they can and cannot do financially. Much like parents handing pocket money to children, they (Mum & Dad) decide how much and when, and to a certain extent, they decide what the kids can spend it on. If, having some numpty in Brussels telling you how to spend your money is defined as independence, then I really need to get a new dictionary.

Between now and referendum day, millions of words will be written. Countless talk-shows will have politicians (of every stripe) discussing this topic ad nauseum. It will seem endless. It has already begun. And of course, until the Nats tell the world what they plan to do, it is all pure speculation.

There is nothing in it for me.

Ranty, I don't know where you get the idea that his party are calling for the referendum right now, because it's nonsense. Lots of work has to be done by all sides to put forward a comprehensive argument. Until then there's no point in a referendum.

Once we have independence it won't be up to the SNP to decide about the EU situation. It will be the responsibility of the new parliamentary representatives. Anything to do with the EU will have to be renegotiated. The people will want a say and I hope it's given to them.The scene then will change once again. Those in the SNP who are centre-right will move to the tories etc. Of course the unionist parties have to get their acts together and would have to cut any ties with Westminster. If they'd done that in recent years perhaps they wouldn't have had the drubbing they've just had.

Nobody's truly independent. Every country has a certain amount on reliance upon others. The SNP could do well if they studied the Swiss system.

All I have to go on is Sky News here in Nigeria.

They may have it wrong but they keep saying it anyway: SNP want a referendum now!

If Scotland modelled herself on the Swiss system I will gladly put all of my efforts into making it so.

I also agree that the situation will change dramatically if independence is won. I just do not trust politicians to do the right thing.

They NEVER ask us about important issues, as the AV referendum showed.

Bread and circuses, as usual.

"With Scotland breaking away from the Union, all of the countries that make up the UK are automatically kicked out of the EU and must reapply."

Really? I didn't realise that. Can you give a source for the information? If it's true, then Scottish independence must be the true cause of every 'other' Briton too, until it comes about.

I didn't think it would be that easy, to be honest, and I doubt if Westmonster would allow it to be so.

Richard, if you google the EU+Scottish independence you'll find hundreds of papers on it. The first one I found is from 1999 but the position won't have changed:

When Scotland is independent it will break the 'UK' agreement and therefore England etc will also have to reapply I should think.

The rules are not up to Westmonster. The rules were made by the EU.

What is needed is for more people to ask questions Ranty. People were apathetic about the AV, with many being angry it wasn't a referendum on the EU - hence the lack of questions. Don't you think?

Thank you Rosie. I had no knowledge of that.

When I said Westminster would not allow it to be easy, I meant that whatever Govt is in power, they will do everything they can to prevent such a constitutional change affecting our EU membership. Changing the rules with the EU's connivance would not be beyond them.

I didn't know either. Well, if it means Scottish independence to save the rest of the UK, as well as solving the whole West Lothian thing and taking care of the Barnet Formula, then there's no actual downside as long as it's what Scots want. The issue of all the Scots in England and vice versa can be dealt with by both governments agreeing to an open border for each other's citizens. So... what do we need to say to encourage them? ;-)