The last two weeks have been filled with disgusting reports of Jimmy Savile's adventures.

The Met are now saying there are up to 1,000 victims of this sick perverts activities. Before you launch in with either "But he was a nice man" or "Dead men can't defend themselves", neither can Hitler, who was fond of dogs. Or Pol Pot, who liked to paint. Or Idi Amin, who had a stunning medal collection.

How complicit were his friends and supporters? How complicit was the BBC? Or those who were in charge at Stoke Mandeville, or Broadmoor? We can't dig Savile up and charge him with anything so we should focus instead on his collaborators. If the claims are true, this animal interfered with boys, girls, men, women, brain-damaged patients and even the mentally ill. Someone had to know about these disgusting appetites and someone (or many people) had to help cover it up.

The police are not above charging either. Savile had strong connections with 14 police forces. An autonomous and independent review team should be set up. One with no favours owed to either the police, the BBC or the various charities and institutions implicated in this unholy mess.

I keep seeing newspapers in which Cameron is quoted as saying "I don't think we should have an in/out referendum" or I don't think it is in Britain's interests to leave the EU" etc etc.

Poll after poll after poll demonstrate very clearly that the majority of Brits want to exit the EU. So I don't care what Cameron thinks. He is not there to act on his own thoughts, he is there to satisfy the needs of the people. His arrogance must be cauterised and he must be told, (God knows even members of his own Cabinet have spoken out now), in no uncertain terms that the people of Britain demand an in/out referendum. Not in 2015, 2016, 2018 or sometime never, but now.  Or as soon as it is humanly possible to arrange. Every day he dithers costs us £55 million pounds.

Cameron adds to our shame by not standing up for us on the EU debacle. I seriously doubt he will be leading the Conservatives in 2015 if he carries on like this.

I wasn't stood next to him or the bobby he insulted so I can't say either way whether he should have resigned or not. I think though, now that he has, and Cameron has feebly defended him, it is clear something untoward was said. The Police Federation may have a political point to make and I wasn't present at their "Mitchell Strategy Meeting" either, so who knows? He (Mitchell) seems like a bit of a twonk to me so maybe it is better that he went. He'll be on the naughty step for a few months and then eased back in. Just like David Laws.....

Osborne travels first class? No surprise there. The surprise is that he only paid for a standard ticket (he has done this before) then sat in first class and tried to blag the seat without paying the going rate. That we should have to pay for this nonsense is beyond me. If we had first class MPs I may look more favourably on this. Reports indicate that the friend of the working class, the Labour Party, have traveled first class much more often that the Tories. Apparently 44% of Labour MPs choose to distance themselves from Joe Bloggs while only 16% of Tories keep us at arms length. Marvelous. How much is this snobbery costing us? I dread to think.

Such a distasteful lot these MPs. Renting out their houses and flats to each other is costing the taxpayers a fortune in expenses. Up to 27 are now known to have been at it and all are expected to whine, tearfully, "But it was within the rules". Cue Nadine Dorries with another "They will kill themselves!" routine. We fell for that one last time, Nad. Millions of us waited but none of the thieving gits hung themselves. Very, very disappointing.

Look how good they are: 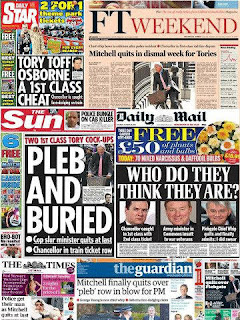 All in all, these shameful activities do not exactly help to make us proud of our elected representatives or our "hallowed" institutions, do they?

Not that we'll do much about it all.

Come 2015 we'll be elbowing each other out of the way in our haste to re-elect these vile people.

And that, my friends, is our greatest shame.

What pissed me off most about the Osbourne ticket affair is that the bastard is a multi millionaire. Tight git...

I like the fact that you've addressed a number of current issues here Captain.

Regarding your point of 'we'll vote for them again' - we won't of course; it's our fecked up voting system that gets them in each time. Labour only managed to 33% of the eligible electorate last time AND in a number of by elections people have 'won' with a percentage vote in the teens (15% somewhere recently I believe).

As far as I'm concerned anything below 51% is illegitimate but what I want to know is this. At what pathetic percentage is the whole thing classed as illegitimate according to our constitution? To quote one of the fuckwits 'we can't go on like this'!

Quite. Quite awful. It's clear we need a firm hand on the nation's tiller. Some one person of huge competence and wise in worldly things, not given to spin nor half-wit ideas. We need a President.
Can we import one? Can MI6 take over? Because before long Cameron will have decided to appoint himself to the role, despite not having the skill-set mentioned above. Or indeed, any skill-set.

"Come 2015 we'll be elbowing each other out of the way in our haste to re-elect these vile people.

And that, my friends, is our greatest shame."

Absolutely spot-on and that pretty much sums the whole dreadful thing up, and that's why we will be eternally doomed with one bunch of the pr**ks or the other.

David Cameron is renowned for saying too much. Let me help

You're wrong Ranty. Cameron is desperate for a referendum.
Or he's a duplitious two- faced lying cunt.
Paris Claims

The thought of David Laws being 'eased back in' is quite revolting.

PS I won't be voting for any of the bastards. I haven't since 97.

The Cabinet Orifice has been engaging in a bit of frenetic censorship today.

A tad late; the horse has bolted and is several fields away.

In an entirely unrelated short film, here's Richie and Eddie placing a bet on "Sad Ken", running in the 3.30 at Chepstow.

"It's a bit of a secret. Only us bookies know about it, so don't tell anyone, all right?"

As far as the Osbourne train ticket saga is concerned, it has long been a 'habit' of politicians to buy a standard ticket and then sit in first class, hoping that the inspector will allow them to stay there, and then claim the first first class fare on their monthly expenses. If they are challenged 2 or 3 times a month and have to stump up the difference (plus fine), they are still quids in at the end of the year! I would suggest there are roughly 10 real 'honourables' in Parliament. The rest are a bunch of f*cking parasites!
Pensievat