You are wrong about many, many things, but some of those errors need correction.

Every time you whine for more, people like me end up with a little less. Hard-working people are robbed every month to support your idle lifestyle.

That £1.2 million house the council put you in? We paid for that.

That plasma TV, that washing machine, that fridge and that cooker? We paid for those.

Those benefits you get every week? We paid those.

Don't get me wrong here. I know we have to support those who need a leg up from time to time, but do we have to carry you for your whole three score and ten? Really? How does that make you feel? Can you look yourself in the mirror every day and feel any sense of pride whatsoever?

Newsflash: the world owes you fuck all.

I've been there and done that. I recall a time when I didn't even have one ha'penny to rub against anything. There was no work in my town. Things looked bleak. You know what I did? I moved to a town where there was work. It took a couple of months but I sorted myself out. I took shitty jobs rather than take the dole for longer than was absolutely necessary. I discovered that once you are working more opportunities open up for you. Radical, I know, but the satisfaction of taking care of you and your own, is fantastic.

But FFS stop going on and on about everything being free. It isn't.

You are just half of the problem. The government is the other half. They waste money in mind-blowing quantities. It's almost as if they are trying to win some sort of award for pissing away the most money ever.

I am sick and tired of paying for their incompetency and your idleness.

I don't mind chipping in, but as more and more people come from foreign shores, expecting to be gifted whatever they need, and nationals just taking the piss generally, my "chipping in" looks more and more like direct support. Is it any wonder I don't want to be robbed of 80% of my earnings?

Those faux charities. Those quangos. Those ineffective NGO's. That Foreign Aid. The same Foreign Aid that buys AK-47's by the container-load for the latest up and coming warlord. I am tired of funding them.

The EU. More wasted money. Unbelievable amounts of our money gets sent across to that thieving outfit.

Failed and failing banks. Untold amounts of our tax go on those bastards. Let them die.

What we need is a prime minister with titanium nuts. One who will happily admit that our "generosity" is killing us. One who will make the changes this country needs to thrive and survive.

Here's another newsflash: it ain't Cameron. It ain't Millibland either. The Conservatives, and that bastard traitor Heath started us down this ruinous path in 1972, and Labour just kept on truckin'. The LibDems are a waste of oxygen. The Conservatives in coalition with the LibDems is an embarrassment to us all.

What we need are politicians that care more for their country than they do for their parties.

Then, and only then, will any progress be made.

Most of this is apropos:- 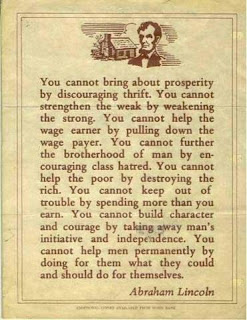 PS-I digressed a bit here and there, but you should know this: if any statement caused even the mildest blush, then YOU are part of the problem. Take some responsibility, FFS.

Quite why they contacted me remains a mystery, however the English Democrats seem to have similar values - and they don't like the smoking ban either.

The government purposefully keeps unemployment high. Why? Simply because in a land where there are plenty of jobs, in order to be able to attract workers, cash incentives have to be met. Yes, by having high unemployment, business owners get to pay their staff shit wages. Add to that fact massive immigration and not only do businesses benefit, but so do landlords - higher number of people = higher demand for housing.

What's happening in the UK regarding jobs and migration isn't just happenchance. High population = more competition for housing and jobs, therefore wages will stay low = higher profits for company owners and board members. It's all about greed. These cocksuckers who run the show don't give a fuck about you, me, their ancestry, culture and nation. They are internationalists who worship money.

"What we need are politicians that care more for their country than they do for their parties."

Really? Don't hold your breath. Banks & Corporations own politicians and they don't become politicians unless they do what they're told. Politicians are nothing but lobbyists for big business. They don't care what the people want and it sums up the moronity of people that still elect these arseholes, to promote more wars that kill their fucking kids!

It's an understandable rant Cap'n, but it's pissing against a waterfall. The elites are finishing their marathon, 100m to go and the nearest challenger is 29 miles back. It's a foregone conclusion. Expect prices to continue rising. People have been conditioned to accept low (if any wage rises). They've accepted the constant raise yearly on all goods. They accept buying technology that lasts 5 years or so.
People have been conditioned to live in the shit lifestyles they're living while the elites live the high life.

You won't stop it captain. Things are going to get progressively worse on a regular basis at the meantime, the makeup of the UK will change drastically over the next 70 years. I'll be dead then. Sad for the younger generations who know what's going on, but they've only got their fellow peers to blame who happily stay ignorant in order to not offend.
I've been called an agent provocateur because of my negative (read realistic) promotion of reality. I am of course not, just one who sees that people will not wake up before the total control society is put into place. In other words, all famous heroes of the past, were they to try what they did then to free their people, today, they'd be banged up before they could sneeze on terrorism charges. The elites have all the bases loaded and their last batsman's coming out to play with a bat the size of Mexico.

No blushing, just head bobbing agreement all the way through.

Good to see you have emerged post troll with sanity intact. You had me worried for a moment.

I find nothing wrong with the points you raise and cannot argue against any of them.

There is no such thing as a leftie or a rightie though in my humble those tags belong in the past. Today there are those who believe in control by state, those who believe in responsibility for ones own actions and a third segment of people who are so shit scared of the alternative to no government aka anarchy they bury their heads in anything that means they don't have to look let alone consider the options.

The understanding of anarchy amongst that third and biggest proportion of the indigenous population of these islands (the immigrants will quickly become migrants again when a better opportunity opens elsewhere) is the one fed to them by the statist crew and its tame media which is why they fear it so.
Just in case this fear level falls the statists then roll out false flag stories and games to bring their dreaded version of anarchy back into focus.

As I see it though the statists are getting ever more brave and are dropping their pretence of equality for all. Believing their own bullshit is invariably what brings empires down wherever they are built.

Cannot wait to be honest

Could not agree more, well said on every point. We are now in the age of collectivism the individual and responsible are to be shunned.

People on the dole should not be allowed to vote. Nor those employed by the Gov.

Top Rant, one of your best.

Not to sure about those on the Dole,not ALL of them want to be there.
But agents of the Govt. yes. My reasoning, that NOT ONE of them contribute to the Income Tax or NI pot.

Agree with what you say CR, but still we should retain our hatred for the bastards that deliberately got us into this mess. Harbinger is correct about that. They have encouraged a welfare state; they want people dependent on the government. They have allowed unregulated immigration that has allowed wages to sink to an all time low. And they have over decades totally destroyed British manufacturing. I lost my job in June, though thankfully I am in a position whereby I do not have to go and claim any benefit - I know what a degrading experience that can be. I can also assure you that the choice of jobs out there is fucking atrocious; shit work, low wages is the order of the day - it hardly encourages those who have been brainwashed into thinking a lifetime spent doing fuck all but to claim 'their' benefits is the easy option. I don't think it's too late yet, but we need to get together, get organised, and create the sort of society we want, regardless of what is going on around us. If we don't, and presuming the world is still in existence, we will find ourselves growing increasingly old and bitter, and blogs such as these little more than ways of letting off steam but with nothing changing.

I appreciate that there are exceptions to every rule and that it is a mistake to use a broad brush.

My point, if there is one here, is that we allowed it. We are not blameless. We elected them. We supported them and we defended them. The old adage applies: we who do not learn from history are doomed to repeat it.

But the main attack is on those who opt to do nothing, and those who do their jobs badly.

I'm with Harbinger. This isn't fixable because it has been designed not to be fixable. The government are not inept, and I wish the dissenting masses would stop speaking of them as though they are. To believe the government is inept or misguided is to fall hook-line-and-sinker for their insidious ploy. They want us to believe this is all an accident and that's why they run news campaigns designed to make politicians look stupid (the expenses scandal etc).

The truth is, as Harbinger said, that this is all by design and they've put stringent measures in place to ensure it can't be fixed. They are ingenious in their conspiracies.

As for us poor younger generations... yes we've been left with one almighty mess of a society, but I and many I know in the 20-35 age group are more aware, more angry, more nationalistic and perhaps more extreme than our parents' generation. We will comprise one side of the polarised society that is to come.