My response to the court after the conviction was not an "Appeal" in the normal sense of the word. You will note that the Legal Adviser knows that as well, and she refers to it in the first paragraph. In my Notice to the court I stated that I was not appealing in the conventional sense. I cannot/could not because I appeared pro se or in propria persona which is to say, for myself. Had I instructed a lawyer I could not have used Lawful Rebellion as one of my defences. 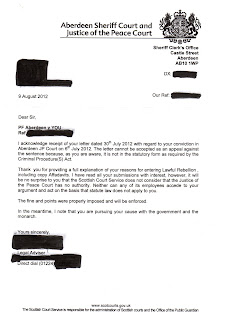 I won't get into the nitty-gritty here. Let's do that in the comments.

Suffice to say that there is some positive stuff to be gleaned from this.

Let me know what you think.

I just managed to read it...i need an embigulator! any way,is that it now? are you taking this further? it seems to say points and a fine will be imposed (as I say..eyesight not good)
thank you for being honest with your progress

i think,that you have the same legal maffia up their as we have down here.

if your daddy lived in the sky,and you could work miracles,they would still have dragged you into their corrupt system,by calling you `king of the road`or some other title..l.o.l
keep up the misenbuggaration,n make them earn their 30 peices of silver.

It should embigulate now James.

I am considering a response.

Yeah, they all sing from the same hymn sheet.

Not that they are feeling any pain right now....

Each time they (the court) have issued me with their Judgement or Order,with their demands for money, they have wrote on the order that I may 'appeal' against the order by using CPR rules. This I have done but as a rebuttal.

For instance, they said I must answer CPR 3.9 seriatim (Latin apparently). This I did in Latin, (wonderful thing google translate)two can play at that game. Haven't heard a thing since May, other than the DVLA saying they don't want to discuss the matter any further.

Course I added that the BoR 1689, the UDHR 1948 are Constitutional Statutes and can never be repealed, that I am in Lawful Rebellion so don't know what is causing the delay of them dismissing the case.

Maybe they are still trying to translate my Latin, Ha Ha!

Well at least they acknowledge Lawful Rebellion and your position with regards to the Crown. They could simply refuse to refer to those things as though they do not exist.

Also, when they say they have 'authority' they do not specify what type of authority they believe they have, nor who bestows it upon them. Apparently, they have the 'authority' of force which permits them to simply proceed with your 'conviction' without allowing any form of legitimate appeal or lawful rebellion.

That letter is basically a hammer tied with a bow - a polite way of saying "you will submit to our force and we don't need to explain why".

How is this in any way positive?

Hello CR
I guess the whole thing about authority can be traced back to the point that consent was given. We give consent away quite easily, often without thinking. Once given away, it is usually assumed that the authority that the other person or body has acquired will continue until it is no longer needed. If a doctor asked you to drop your pants, most people would do so. If you met the doctor in the street later on and the doctor asked you to drop your pants, I don't think anyone would do so... the earlier assumed authority has expired.

The moment when a JP is asked to judge a situation is surely the point at which consent has been given (away). If a person comes voluntarily into this system, then authority surely has also been given away.

It is probably best to challenge the authority of anybody who is assuming it at the earliest possible moment.

These days offical letters have to be politically correct, so nobody gets offended.

This is a classic "oh really that's nice" but pay the fine thank you.

Two things. First, at least they note your lawful rebellion; second, its' interesting they even wrote a reply.

A small but notable milestone me thinks :)

"It is probably best to challenge the authority of anybody who is assuming it at the earliest possible moment."

As someone whose situation has nothing in similarity to yours, and I live thousands of miles away and I couldn't begin to understand the ins and outs of your legal system, I can only admire your tenacity and the fact that you are following the rules,

trying to change the system from within the bounds of the system is a laudable thing and I commend you.

--god knows I botched my own "pro se" divorce, but He had Name, Money, and Power behind him and I had a jurisdiction that doesn't provide pro bono attorneys in domestic cases unless children are involved... and some of my friends tell me the victory is in getting rid of the bastard --

I am nobody that matters except that if it does any good to know I respect what you're doing and encourage you to not give up, that's all this comment is for.

Take care of yourself.

A heads up CR. Please publicise these and get people pulling the racket apart from the roots.

Re the UDHR1948 and the two UN Covenants from 1968 and the UN Declaration from 1998 are all binding international treaties on the UK. They are not legal documents but ratified pledges to implement. If a judge or official refuses to hear them then point out that his employer ratified that pledge and no individual bureaucrat has the power to unratify them. If any employee of UK PLC refuses to see or hear them then that places that person in dishonour as they are breaking their employer's formal pledge.

Interestingly, what I've come to realise is that we have been sold a bait and switch and its not our human rights that we should be focussing on but our fundamental freedoms! Rights derive from Freedoms - stated in preamble of both 1966 UN Covenants that UK ratified. Much more to this than immediately meets the eye and I am now seeing this as CODIFYING our fundamental freedoms in line with our traditions and customs and British Constitution.

The 'Declaration on the Right and Responsibility of Individuals, Groups and Organs of Society to Promote and Protect Universally Recognized Human Rights and Fundamental Freedoms' is a real doozy that slipped under the radar! It was a present gifted to us by good people who saw the UN being completely infiltrated back in the late nineties and fired this out for us to protect ourselves.

Please read and quote liberally from. It reinforces that the UDHR1948 is as relevant and binding today as it was back in 1948. The guys that did this saw what is coming and were empowering us as individuals and groups.