Reasons To Be Fearful 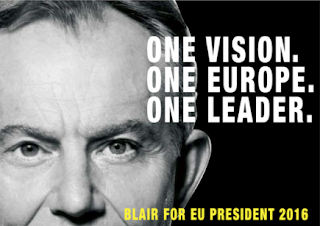 In a world where banks fail, but are handed billions from the taxpayer

In a world where MPs fiddle their expenses, repeatedly, but keep their jobs anyway

It is hardly surprising that war criminal Blair will be considered for the top job in Brussels.

Buggrit, millenium hand and shrimp. He needs taking out. He is above our morals you know, god will be his judge. B'stard.(Trying like hell not to get into a rant here).

This dude is clearly a psychopath.

They see that as a qualification, not a deterrent.

That's one - Carney is another. It's a sleeper issue which hasn't blown open yet.

By all accounts, the fucker may actually know what he is doing.

The man is a "grade A" gobshite

Blair won't be the President of the European Council for many reasons...I think I may lay significant sums against him doing so on Betfair like I did last time - a tidy sum I made as well.

I thought it sounde familiar.

And you forgot to mention a world where warmongers are awarded the Nobel peace prize.

I fell a song coming on.....oh! already did one that seems to fit. Psychic or what ?

Looks like the EU has finally found someome bent enough to do the job of EU president justice.

I bet Abu Qatada won't get sent on the Work Programme, or have his Dole stopped.

I'd love to see his job search!

Blair has had his heart set on being EU president for a decade or more. Everything he has done both when PM and since has been towards that end.

Their time is growing short. Have no fear.

It is not beyond the point of 'joking' that someone actually WILL take that fcukwit out - people can only take so much piss taking and his election would be one step too far for many of the right mind.

If Blair became EU President, it would dramatically increase his chances of being assassinated. Therefore, I think he should be supported every step of the way!

I disagree with your assessment of the Blair creature CR...

I reckon he is a sociopath...

Ah, give the man a chance. He's done such a good job as Middle East peace envoy, and previously UK
PM.
Paris Claims

Such a pity that Guido Fawkes' former contributor did not get his 650 lamp posts and roll of piano wire. Executing this whoremonger, oops sorry, warmonger, who has said not a lot to defend the good foster parents of Rotherham and has been totally silent in describing Joyce Thacker as the fascist she is, would have been doing good to all mankind.

CR. exactly where is your evidence, let alone proof that Cyril Smith " buggered " little boys? Do you really think that the release by the G.M.P. to the effect that they are convinced of his guilt without any recourse to the law of Magna Carta is the course that the British legal system should persue? If I may suggest a little more sober reflection and a little less tabloidism in this case.

Let me explain:
Marc Henri Glendenning (The Bruges Group) has set up in his own time what is clearly a cracking spoof campaign to highlight the importance of the EU presidency.

The Democracy Movement has a long history of spoof campaigns to highlight certain issues on which they campaign.

Spoof or not - it still gives the necessary insight into Bliar's mindset...Furor Teutonicus has it right: