All sorts of shite going on at the moment so I thought I'd just do a potpourri. A 'news stew' if you prefer.

The Vicar of Christ has resigned. Yip-de-fucking-doo.

There was provision for it in his contract so can they just get on with the whole conclavey thing, elect some old fart to run The Greatest Paedo Show On Earth, light a fag in the Sistine Chapel, and then we can all get on with life. Except that between now, and the lighting of said fag, it will be rammed into our brains for weeks and weeks and weeks....

HINT:  If you don't want to go through all this 'uncertainty for the Church' again, try electing someone under 50 for a change.

It may be a black dude (Shock! Horror!) as part of some wanky plan to seem progressive. You want to be progressive? Endorse condoms and we can reduce the prevalence of AIDS in the world. Or, and this is blue-sky stuff, actually agree to and promulgate the notion that abortion is none of your fucking business, and the decision remains the sole responsibility of the women who need them, for a whole raft of reasons.

And while you're at it, have a root around in the catacombs and print those 66 missing Books of the bible. I'd really like to see what they contain.

Lastly, it's make yer fucking mind up time: if Roman Catholics priests are supposed to be anti-homosexual celibates, why are they continually fiddling with little lads?

Not that Pope Benny did anything about it. 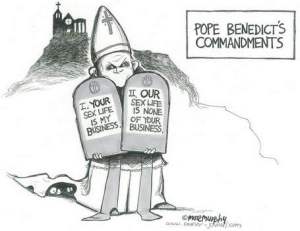 A tad hypocritical, no?

Poor Dave. Mere moments after returning from the EU waving a bit of paper saying "We got a reduction!" (it turns out we got no such thing), and insisting on driving through a non-manifestoed Bill to allow gays to marry (for the record, I don't care who marries who, as long as both are willing) his popularity, particularly amongst women, drops faster than requests for Lance Armstrong to deliver motivational speeches. Here, in full technicolour, we have a man who could have saved us all from the prospect of suffering another inept Labour government for quite some time, virtually ensuring that they will get back in power in 2015. If the polls are to be believed, but I suspect they aren't.

At the risk of sounding unpopular, so fucking what? Did anyone die? Did anyone even get sick? I admit that it is all a bit ropey, and somehow, Al Qaeda, or the Mafia, or Jimmy Savile is to blame, but FFS, horse-meat is quite tasty. So much for all those chefs and their spectacular taste-buds, eh? The fuckers don't know what they are eating and they are the professionals, so how the hell are we supposed to know? Next up: fish fingers contain no fish and are made entirely of panda meat. Gird your loins for the outrage-fest that will be visited upon us.

My only bit of good news.

As most of you know, I spend an unhealthy amount of time at the UK Gov legislation site. I stumbled across a piece of primary legislation for 2013 in which they are repealing dozens of old laws. Sadly, none of them matter a fuck to most of us, containing, as they do, some real beauties like this:

Not that the repeal of the NI Surcharge Act is especially thrilling, given that the Coagulation has introduced 299 tax hikes since they discovered the public tit never runs dry. Total tax take in 2009/2010 was an eye-watering 513 billion quid and is set to rise to a ball-breaking 671 billion in 2015/2016. Our tax laws now weigh more than Cyril Smith. (Younger readers might want to google the fat kiddie-fiddling freak to better understand the comparison although I am sure you will get the gist).

Apologies for not responding to all the great (and not so great) comments lately. I am running around like fly with blue arse. A pathetic excuse, but there it is.

I shall append a suitably disrespectful video and publish soon - I thought it might be nice to aim for Sunday...

I believe the Pope is resigning to spend more time with his family.

Now THAT wouldn't surprise me in the least.

Whilst you're on the subject of 'LAW' have a gander at this:
http://mikesivier.wordpress.com/2013/02/11/uk-police-state-moves-a-step-closer-to-your-door/
We knew it was coming but FFS.

Africa, Africa.
Q.
Why are the Legion Etrangere in Mali?
A.Because Africa is up for grabs.
Remember Africa is not secular like the hmm, hmm, pagan north.

With an African Pope of course!

Disclaimer.
This comment is to be taken as a wild guess, gut feeling,considered opinion,or event based best guess.

would that be the corleone`s

as for the horse meat,well it just makes life a little more interesting.

ie` when the doc instructs you to watch your diet,you can take yourself off the the races.

or when asked what you would like on your burgar,you can `now,reply
a fiver each way.
stay well,and stop rushing about so much'
regards.
pitano1

Quote "I am running around like fly with blue arse."

The WAR on The Scottish Government
moves fast and they
are now surrounded by Taxpayers.

NEXT week the fuknin European Union may take a broadside.

Afternoon Capt.
Couldn't let the Popey thing go without linking to the the best
popey vid ever - Tim Minchin -
The Pope Song

(can't seem to get the link in
when I preview - oh well, it's
on youtube)