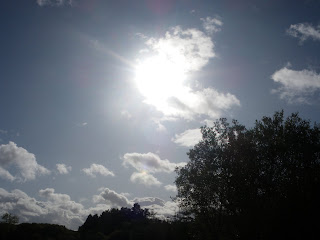 I wanted to write something but was lost for a topic. I figured a wee stroll in my nearby woods would help. The sun was out, as you can see, and there was a light breeze, so no complaints from me. Yesterday I walked my dogs in a force 11. It wasn't nice. Something got blown out of a tree and smacked me on the shoulder, never did find out what it was. In any case, no-one died. A good day.

In amongst the peace and serenity of the woods I got to thinking about risk. An odd connection, I know, but there it was, unbidden, in my little brain, so I pondered it a little. To give this some context I should explain that in the sixties, my parents decided that we should seek our collective fortunes in South Africa, and off we trotted. We flew BOAC (British Overseas Airways Corporation, for you young 'uns) in a DC-8, I think. We landed at Jan Smuts airport and got on with our new lives. None of us kids being aware that Nelson Mandela was doing time on Robben Island, having been arrested 4 years earlier in 1962. Some terrorist activity happened, lots of demonstrations, illegal detentions and the like, but we were ignorant of it all. We were busy growing up in a strange new land.  Fast forward 5 years and we moved north to Rhodesia, where Robert Mugabe was doing his thing. He became ever more brutal and got tired of raping and torturing white farmers out in the sticks, and set his sights on the bigger cities. My mother decided that it was time to leave. We spent another year in South Africa before returning to England. I did a year or so at school, finished with education, (by now I had been to 13 different schools so exams were a non-starter), I left to see what I could do with myself. After trying various things, I joined the army and served for 7 years. Coming straight from a cocoon, totally and utterly controlled by anyone with more stripes than me, I decided that I would start my own business and become a millionaire. I did both. I lost the million in the recession of '89-'90, and headed north to Scotland, bound for a life of adventure on the oil rigs. After 11 years of scooting around the world, my boss suggested that it was time for a desk. I took him up on the offer because my family were tired of waving me good-bye. I migrated to business development, and, having 40 years experience in Africa, my boss thought it was only right to "award" me the territory. My boss is an American, and it took me quite some time to educate him. He thought Africa was one country. Now that he knows it is actually 54 nations, he realises the scale of the mountain I have to climb. As well as those glorious sunsets, the open savannah, the wildlife, and wonderful friendly people, many places are also festering shit-pits. I can tell you now that I don't get to see too many savannahs. The countries I visit can be brutal. Life is very, very cheap. In one bar in Lagos I was offered a brand new AK-74 with a full clip, for $7. When I explained to the chap that I would have trouble sneaking it past the Border Control guys, he thought for a while, then offered me a girl. "$10", he said. "For the night?", I asked. "No, you can keep her", says he, "She's around 9 years old so she can be trained". I excused myself saying that I needed to pee. I had a word with hotel security and by the time I got back to the bar, the slimeball was gone. I genuinely hope that he is rotting in a jail cell. In Port Harcourt earlier this year I missed being kidnapped by just two minutes. A Scot was snatched instead, but thankfully he was released unharmed four months later. I have since been back to Nigeria a couple of times. As bad as it is, there are worse places, but I have to go there to do my job. Similar "delights" can be found in Angola, DRC, Cameroon, Chad, Cote d'Ivoire, Equatorial Guinea, and, to a lesser extent, in Ghana. Even with the right paperwork you have to bribe your way in, and bribe your way out. It can sometimes be unsettling but it is rarely frightening. These people have no money. I do. It is their job to separate me from it.

The point of that rather long ramble was, I hope, to demonstrate that I am not risk averse. I never have been. I could have opted for a quiet life in a quiet village with quiet neighbours and a quiet death. I smoke, I drink, I eat the "wrong" things, I don't exercise especially, and I occasionally have sex. Risky behaviour that, as defined by the righteous, but I don't think for one second that any of those activities will claim me. I fly up to 40 times a year to some shitty places, where, strangely, kidnap is the least of my problems. There are bombs, bullets and beheadings awaiting me in some of the other places I visit. I refuse to take malaria pills, sprays, balms, creams and salves, and I have so far avoided any illness from my sojourns into Africa. (I did contract Legionaires Disease once, but I lived to tell the tale, so that's alright).

I think finally, we come to the point. But first, an analogy. As I walked today, I watched my two dogs. One is 12 and the other 4. When the younger one was a pup, he looked up to the older one. She led the way, and he took her advice on where to pee, which puddles to walk through, or which tree to sniff. Today, for the first time, I saw a reversal. Now the older one followed young bugger-lugs everwhere. She peed where he peed, she went where he went, she sniffed what he sniffed. To raise this activity to a human level, aren't we in the same situation? Those snot-nosed kids we reared are gearing up to run the country. It was ever thus, I suppose, but it is different now because it is happening to me. The lads and laddettes of today are our future leaders, MPs, MSPs, AMs, doctors, judges and police chiefs. But here is my worry: they have all been taught to avoid risk. Imagine if our forefathers had been the same? We would have achieved considerably less had they been full of terror, fearing risk as if it were a bad thing. Nearly all of mankinds greatest achievements involved some degree of risk, but nowadays we are breeding children who have been taught that risk is to be avoided at all costs. No playing "tag" in the school playground, no football, no running, no rough stuff.  No tobacco, no alcohol, no sweets, no fats, no salty snacks. To even see these things on TV or at the movies will presumably scar them for life. How will these terrified humans lead us into the future? I dread to think.

It is less of a worry for me, really. Every time I step into an aircraft, statistically at least, I am closer to my death. Every time I step off an aircraft in some hell-hole in Africa, I really am closer to my end. I don't concern myself with the risks I am taking because I have been doing it since I was four years old. Having visited over 70 countries on our planet so far, I genuinely hope to see the remaining 130. I can mitigate the risks and stop traveling but I don't think I could do that. One of the most attractive aspects of my job is that I get to visit some dangerous, but extremely interesting places. I get to meet some fascinating people. I get to explore cultures that would otherwise be unavailable to me. (Unless, of course, I traveled to London,  Leeds or Birmingham instead). I jest, of course. I love diversity and multi-culturalism, but there is a limit, and a gently closing immigration door will help a lot. The one major difference between me, and, say, Muslims, is that when I get to their country I just try to blend in. I do not demand that they change their way of life to accommodate me. I simply live by their rules when I am visiting. After 40 odd years of travel, this has stood me in good stead. If only they would apply the same reasonableness when they visited my country, we would have far fewer problems.

To conclude this meandering tale, I will say that my beliefs fit in with my new Freeman way of life. I think it can be summed up in a single sentence: without some risk, life is meaningless.

Today's (and tomorrow's) leaders don't seem to understand that.

Four months ago I turned my back on a Nigerian copper who was pointing his gun at me. Turning my back on these dullards in power today is far, far easier.

How goes it with the guns and horses?

I have an interest in both, but not like your more healthy attitude to them. I want to grab a gun, leap on a horse, ride into town and clean it all up.

Good to see you posting!

Thanks CR - loving the riding & shooting's always fun, lots of shotgun and .22 outdoor plinking lately - a bit of pistol. Summoning up the fiscal courage to get another rifle... maybe an FN FAL - for the fun of it.