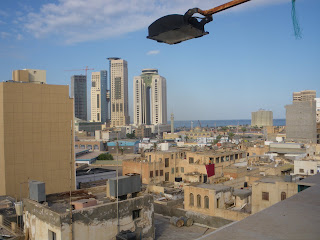 I did not find Mr Megrahi, but several people said a heartfelt thanks. (As if I had anything to do with his release....).

The view above is from the 7th floor of my hotel, looking north. A mix of the old and the new.

Already I miss the heat and the dust. And the ability to smoke inside buildings. You may well wonder how this is possible. It turns out that man has invented a wizardry called air conditioning. This made the smoke disappear. It was truly mind-blowing. Many of the people I visited had ashtrays in their offices and it was nice to act normally again. No-one was terrified of second hand smoke. No-one did that odd hand-waving and fake coughing.

I wish that we in the developed world had access to this air conditioning. It is a wonder to behold.

Tunisia next. I already know that they have a similar attitude and have also discovered this magic.

Maybe one day the new world will discover this technology.

I live in hope.

Welcome back Cap'n - you obviously had a nice time. Do not dispair re the lack of air conditioning or the ability to smoke where you wish - the revolution is coming!

It was a wonderful trip. We worked 19 hour days but got a huge amount done.

So much so, that I may have to live there for a while to get our operations up and running.

There are, of course, worse places to be.

I cannot wait to be part of the revolution! It has been a long time coming.

It's good to be home.

First thing I check after leaving the airport are the lamp-posts. They are always depressingly corpse-less.

I landed at Aberdeen airport and I counted over 50 signs on the wall in the Immigration area. All of them negative.

Not a single one says "Welcome to Scotland".

Just found your blog. You wanted comments so I have to oblige. Keep it up and best wishes to you. The way to freedom of (B.S.) is through people like you. You inspire people to look at there lives and see them in context with reality. It is ridiculous no person can live their life without breaking a "law". Show me one person who has claims to have not broke a "law" and I will show you a liar or an invalid.

Good to have you here Sean.

Mostly I will be discussing Freeman issues, but it is in my nature to vent my spleen on other matters from time to time.

I have just received a further reply from the Home Office and I am considering my response. As soon as I have made a decision on what to do next I will post it here for you and others interested to read.

Please do ask questions, please do challenge what I am saying. I am very happy to defend what I am doing.