I got home late last night.

Thank you so much for your words of condolence. I appreciate every single kind comment that you took the trouble to make. I was just told this morning that the Chief Coroner has released my dad's body and we can now go ahead with his funeral arrangements. We will give him the send off he deserves on 12th November.

Germany was everything I remembered it to be: good beer, friendly people, and efficiency in extremis. The only truly remarkable thing was the sheer number of non-Germans I saw and heard. It was almost like being in the UK......

Yesterday, scudding my way across a lovely landscape on the train was mostly a pleasant experience. Decent scoff in the restaurant car and good, cold beer. Then, just 50 km's from Munich it all goes pear-shaped. Wrong kind of tree fell on the line and we stopped at a station we were supposed to whizz through, this train being the intercity express. Within five minutes, seven coaches arrived to take us all to Fleising where we could catch a train to Munich. I missed my connection to Stuttgart but in the event I only had to wait 18 minutes for another service. I got to the airport in good time and my travel was not too badly interrupted. So, all's well that ends well.

Until I see the news this morning, that is. I picked two stories to look at and in that great newsy tradition, we end on a silly.

WTF is wrong with this government?

The Border Agency, those much loved despised incompetents, now want to retain lose vast amounts of data. Business as usual, then.

"Such a move would raise concerns because of the immigration system's appalling data security record.

In 2006 it emerged more than 450,000 asylum records had been found dumped in drawers and left in corridors. The backlog was finally cleared only this year.

Nick Pickles, of campaign group Big Brother Watch, said: 'Last month the Public Accounts Committee slammed the agency for the chaos and abuse of its eBorders system, so to be contemplating giving it access to details of who we email and what websites we view beggars belief."

The EU game continues, I see.

Further reading reveals that not enough damage was done to Cameron and the twonk is still hell bent on donating vast sums of taxpayer cash to the numpties in Brussels. On the upside, it looks like some (Tory) MPs decided to go with public opinion and will no doubt pay the price for their betrayal...

A human interest story. Well, perhaps not, as it involves a hedgehog. Read the story. Marvel that so many resources were expended on little Crispin, then think about how poorly these agencies respond when it is a human being in difficulty. I am sure you can think of your own examples.

And, just so you know how important that news is compared to some really heavy shit going on just now, look where it features on the "most widely read" list: 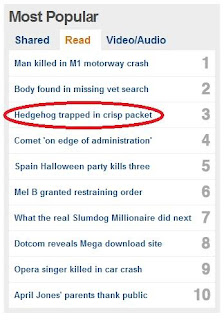 Mind you, it's mostly shite anyway.


The mind, it boggles, does it not?

Oh, I did see a story on those greedy Westminster fuckers but I lost the link. Apparently they are allowed to claim £160 per week for food. I think a state pensions is half that amount. I am so very, very pleased that we are all in this together.

We really are fucked, aren't we?

Welcome to back to blighty Cap'n, glad you had a good trip. As you have already alluded to, not much has changed - the SNAFU continues unabated.

£160 a week in groceries, and I suppose that's on top of the subsidised scoffing in the Commons eateries eh? Never was the phrase "trough snuffling bastards" more apt. As I've said before - they've just found new ways to trouser the loot.

I'd like to say it is good to be back.

Yep. The cheeky bastards stuff themselves on subsidised food and drink during their "working" day then scoot into Fortnums to fill up the fridge.

Thieves. All of them.

So, the hedgehog (let's concentrate on the important stuff) had it's NOSE stuck out the bag; in other words it wasn't trapped at all! What, couldn't some local's kid have shinned over the fence and picked it up to put in the back garden - or feed up on cat food indoors if you like.
Maybe I should change my name to Mr Tiggywink and see if I get better service from these dolts.
Good to see you back BTW.

Yes, we'll happily let our pensioners freeze to death in their thousands every year but a hedgehog in distress? Mobilise the Reserves!!

Germany was everything I remembered it to be: good beer, friendly people, and efficiency in extremis. The only truly remarkable thing was the sheer number of non-Germans I saw and heard. It was almost like being in the UK......

And when you were over there, how did you feel that these people were painted as demons by the western media in the 30's onwards? Did you think, how these people could have changed so quickly or did they ever change? It makes you wonder doesn't it?

And yes, Germany is heavily populated by Turks. They've invaded Germany en masse. And of course they were allowed to enter because Germany, like all other western nations, is under the complete control of Talmudic Jews who want nothing more than to see the demolition of all indigenous culture in this world, so that they, as the miniscule minority within, will never be booted out of any land again by the majority indigenous populations.

This is exactly what Hitler saw and tried to stop from happening, but because the Jews were of course 100% in charge of the west, then their main indoctrination source, the media, painted them as hateful individuals. It's ironic when one realises that Germany, after WW1 was (and still is) under apartheid, with a Jewish elite dominating in all walks of life. The west went crazy at South Africa, yet turns a blind eye to the Jewish fifth column within that seeks (and is succeeding) to utterly obliterate any indigenous culture whatsoever.

I suggest you read some Mike James, an exiled British journalist now living in Germany. He's got a lot to say on the situation over there and I pretty much can't fault a word. Here most Brits attack Germany and Germans, yet haven't one clue about them whatsoever, other than the propaganda they've been indoctrinated with through schooling and of course the MSM. Ironic as well when one considers that Germans are English kin. Where did the name come from their country for goodness sake? A kin they went to war against, all because they wanted to remove a deadly parasite from their society that has successfully carried out their wishes for the goyim, as they ever build their totalitarian new world order with which to enslave us all within.

Keep your head up cap'n. You're a tough cookie, who at the moment has right to feel sad. It will pass.

Last time I was in Germany was about 13 / 14 years ago. Went for a long weekend to visit a couple of German friends I knew from Greece when I was living there in the south.

I had a great time, but I went to a few (city) bars that had a kind of "darkness" (for want of a better word) about them. Can't put my finger on exactly what it was, just a gut feeling. Not like anything I've ever experienced in UK. Or anywhere else, for that matter. Nothing bad or awful, just the feeling that I'd been transported into the fringes of a Kafka novel somehow; slightly surreal.

But the beer is fucking brilliant. Lots of pubs with the big copper beer thingy (sorry, can't remember what it's called) taking pride of place in the middle of the bar, and several superb in-house brews to choose from. Yeah!

When I left, my mates drove me to Frankfurt airport, and we thought a quick beer was in order before I got my flight. Well, one beer led to another, and I had the pleasure of hearing my name being called out over the tannoy (fame at last...), telling me that if I wasn't at the plane door in five minutes, it would leave without me. Bugger. I was enjoying those beers. I made it with minus moments to spare - when I was running down the passageway at full pelt, I heard the guy I passed calling the plane saying "hold the door a mo - we've got a late one coming..."

All condolences for your loss, CR, and give him the send-off that you know he would want. However, to add to your despair, while on a bus journey today I was skimming through a copy of the Metro, to find a truly bizarre twisting of logic – apparently, because of our desire to stamp down on the outrageous bonuses being paid to failing bankers, the days of free banking are soon to end. My tired brain refused to read further to try and understand the reasoning that, because less is being paid out, more has to be paid in, but I am sure you should be able to find a copy of the freesheet (front page – “OM4G”. Hmmmm…) and work it out for yourself.