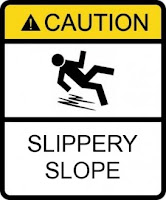 The sign above has to be the cleverest sign in this rapidly degrading nation of ours. It will become, I hope, an obvious theme throughout this rant.

It should be nailed to the inside of every door in the land, to serve as a reminder of what happens when you give way on a small thing that does not necessarily bother you. You may think that something like the PACE "Stop and Account" shenanigans won't affect you overmuch. After all, if you have nothing to hide, you have nothing to fear, right? A reasonable, but completely wrong assumption. By giving the police, or worse, those idiots in parliament the nod to carry on with this nonsense you put us all in harms way. It has affected hundreds of thousands of people, yet a staggeringly low number of arrests have been made. This is yet another case of punishing all for the sins of the few.

The Police National Computer was an innovation back in the day. It became a repository for all data on the bad guys. It meant that every police force in the land could whack a few keys and get the form on the villain they either had in custody, or wanted to have in custody. It was a great idea. Until innocent people had their details on there by mistake. It's the same old story where computer databases are concerned. GIGO. Garbage in, garbage out.

Just for chuckles, let's see who now has access to the PNC:

8. Department for the Environment, Food and Rural Affairs Litigations and Prosecutions

11. Department of Works and Pensions Solicitors

19. Her Majesty's Inspectorate of Constabulary

21. Her Majesty's Revenue and Customs

So, just the 43 agencies then. No danger of those many thousands of people with access making mistakes or worse, making mischief. No danger at all.

I see today the sentences for those that harmed, tortured and killed Peter Donnelly are woefully inadequate. They range from 3 to 5 to 15 years. I am, by nature, a libertarian and should really disagree with heavy sentencing but where children are concerned, a red mist descends. I would spend 38p on each of the three animals involved in the harming and killing of this innocent little boy. 38p is the cost of 1 x 9mm round. £1.14p and our problems are over. Instead we will spend hundreds of thousands of pounds on this vermin. Thanks to their human rights we also have to give each of them a new identity when they are released from their cosy little cells in 1.5, 2.5, and 7.5 years respectively. Justice isn't blind. Justice is a fucking moron. Oh, and just for the record, I would also spend 38p on every case officer involved from Haringey Council. Incompetent fuckwits, every single one of them.

The dreadful smoking ban continues to outrage me. This pathetic legislation was enacted just over two years ago and is the single biggest cause of my misery as it ended my social life. And yes, I am hale and hearty, so I can simply step outside the pub for a smoke. But I will not debase myself. My landlord will start seeing my money again as soon as he welcomes me inside, with my cigarettes, like all the other patrons. I deserve to be warm, comfortable and safe, just like they do. I am happy to pay todays prices for beer, wine, gin, whatever, but I will not pay and then voluntarily walk outside into all weathers just so that I can smoke. The anti-smokers are just realising that they also voted in the demise of their own local pubs and clubs. They really should be careful what they wish for. I have read more about smoking and second hand smoke in the last few years than is strictly good for me. I now possess an encyclopedic knowledge and a humongous library containing all the original studies. Disclaimer: I have all the studies that they published. Hundreds of studies have been buried deeper than Jimmy Hoffa because they do not conclude that second hand smoke is harmful at all. As it is, those that they dared to publish are still pretty awful. The ratio is 6:1. For every study that claims harm, there are six that say it does no harm. Given that the evidence is non-existent I can only conclude that the 646 chimps in the HoC enacted legislation to combat an odour. Well done.

This last item (for now), concerns the Chancellors brand new tax. Not satisfied with robbing us of 52% of our earnings every year, he has decided to tax us for parking our cars at work. Just how nasty can this clown get? More importantly, just how stupid can the British public be? My guess, and it is based on many such examples, is that they will react typically. That is to say, they will do fuck all. Then, in the one pub left open, they will stand and piss and moan about it. I wonder how many will even try to stop it happening?

Not enough, is my prophecy.

For every single one of us.
Scribbled by Captain Ranty at 1:43:00 pm

I like you Captain am completely incensed by this dreadful smoking ban,unlike you i hang out in half a shed outside my local a few nights a week, what amazes me , when i go into one of my rants about the ban as i do everytime im in said shed is the apathetical attitude of my fellow smokers, you know the sort of thing "well we cant do anything about it its the law innit" or "musnt grumble" or even worse " i dont mind coming outside" i weep for my country i realy do a nation of fucking sheep.