Cameron is to offer an EU referendum in 2018, apparently.

But we've heard that before. The last guarantee was "Cast-iron". At least he didn't over-promise this latest nonsense.

It's the DM, but read the full thing anyway: Voters "could" finally get a say on leaving EU in 2018

Shall we fisk it?

"David Cameron will pledge to hold a referendum on a new deal with the European Union in 2018, it was reported today."

Yup. And I have some genuine pixie dust to sell.

"The Prime Minister will use a landmark speech on the UK’s relationship with Europe to set out the process he hopes will secure the return of powers from Brussels before seeking the approval of the British people."

He already has my full approval to return all powers to Britain. Today.

"To add to the growing sense of division, the United States today said Britain should not leave the EU."

With respect, do fuck off. None of your business.

"The PM is due to give his long-awaited speech later this month, thought to be at a high profile building in the Netherlands."

Why don't you give that speech, today, at a "high profile building" in fucking Westminster?

"Mr Cameron will argue that Britain must stay in the single market, reject the idea of a Norway-style trade agreement."

Ri-ight. Because that same agreement is really holding Norway back, isn't it?

The rest is in a similar vein. Read it, but have a bucket standing by. 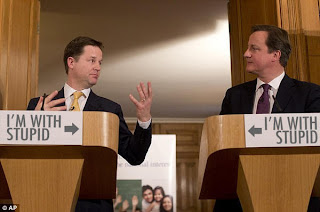 That odious toad does not want us out. And why would he? Like Bliar he sees a glittering career and and a fat pay-packet in Brussels someday. Not to mention his new addiction to power. Just recently he said he wants another 7 years in the big chair.

Like despots in Africa, he has no desire to leave office. We'll have to drag him, kicking and screaming, from Downing Street a la Snotty Brown in May 2010.

No help to be had by voting Conservative, or Labour, for that matter. Let's not even consider the LibDems as a serious political party. They are beyond hopeless.

Just look on our roads. Audi, BMW, Mercedes, Renault. Peugeot, Citroen, Fiat, Alpha Romeo....think they want to lose all that business, do they shite. They are bluffing for all they are worth, and that limp wristed Eton fag is falling for it.

Since we have a trade deficit with the rest of the EU i.e. we buy more from them than they do from us, unlike the rest of the world with which we have a trade surplus, it must follow to anyone who has got past the first page of "Economics for Dummies" that more jobs in the EU must depend on our continuing to do business with them than jobs in Britain depend on the EU continuing to do business with us.

This gives us a considerable amount of leverage in any negotiations for withdrawal which the likes of Cameron & Miliband will never use committed as they are to the concept of a "single market" which is basically a scam in which the British taxpayer and consumer are ripped off for the benefit of the rest of the EU.

It's simple really; in or out. I choose out becuase the EU is fundamentally even less democratic than the UK Government. Will lose out on some things? Probably, but we'll gain far more; our sense of purpose, our sense of being British. DC and his crew will never deliver on the in or out vote but will promise all whilst delivering nothing. It's not about xenophobia it's about the right to self determination.

I agree with all of you.

I can't stand being told what to do by ELECTED officials, and I absolutely will not be ordered around by UNELECTED pricks.

At least three years after he has been put out to pasture.

Didn't i hear that smarmy twat pontificating about the choice of the people of the Falklands over their own destiny following the recent letter from the Argy govt wanting the place back.

Is the twat going to don his flak jacket and do his own Thatcher piece to show he's got a set, (she had more bollocks than all the bastards we now have put together).

Bastard hypocrite he is.

They must think we're all bloody soft in the head like the millions of silly buggers lapping up the BBC state broadcasters bloody propaganda.

Fuck me i don't drink but these bastards could drive a man to partake.

They are never going to give us a referendum in a million years let alone 5. Their central banker masters won't let them. They've been at it for the last 40+ years, they aren't going to just let us leave like that. It took an act of treason and lies to get us in to this stupid club. (they couldn't do it by force)I hope that we do leave the EU but just can't see them shelving 40+ years of lies deceit and the dismantling of our once great nation.

Even if UKIP get in it's still not cut and dried because as the EU citizen who claims to still be Queen stated to a greedy arsed butler: "There are dark forces at work".

Hence why I still think we're fucked, unless a critical mass of people do something to stop it and I just can't see that happening in this day and age.

I genuinely hope that it will and that is why we ALL should keep shouting out and trying to inform other people, weather it'll be too late before that critical mass of people realize is at best questionable.

No successive Government is bound by decisions made by their predecessor and, given that the Conservatives WILL lose the next election and the promised vote is a forgone loss to us, the only other outcome (realistically) will be a Labour win. I don't read anywhere of Labour's commitment to a referendum therefore we're headed for a future without EVER having a say on this issue.

As much as the Conservatives are derided for not giving us a vote NOW, the Labour Party MUST step up and give us this assurance in the event of their gaining power.

We may well get a referendum eventually .. but watch out for the wording of the question (which will not be released until the last possible moment):

"Do you disagree that for Britain to disengage from the EU will not be in the economic interests of the future of this country?"

And watch all the silly fuckers vote 'yes', thinking that they are voting to leave the EU.

I wouldn't trust the slimy fuckers an inch. Or should that be 25.4mm?

If it's a critical mass of people you're after, consider this (off topic a bit) - http://www.dailymail.co.uk/news/article-2259942/The-crazy-climate-change-obsession-thats-Met-Office-menace.html

Even Daily Fail readers are seeing the AGW con for what it is. Maybe there is hope for us after all ?

Firstly, it is most unlikely that that wanker cameron will be in any position to call a referendum after the next election, and secondly, if we ditched the EUSSR then, that's another few billion down the crap hole that we'll never see again.
The man is a cunt.
Paris Claims

Once and for all, we don't want "more europe" or in fact ANY europe except to trade with europe as an independent and free nation.

This latest statement from dm simply reinforces the plain truth that most of us have been aware of for some time now. Our politicians and establishment are all cut from the same cloth of corruption and everyone of them need to go peacefully, either now or by force at a time and in circumstances beyond their choice or control. The dazzling depths of deceit and levels of fraud perpetrated against the people of this country defy any description. “We The People” have been systematically and consistently dumbed down and subjugated to the point of serfdom and am convinced we are very near the revolution and I do believe we are edging towards that abyss on a daily basis. Time after time I see tumultuous world events and despots defiantly hanging onto their wealth and power as if it’s a birthright only to be thrown down and in some cases brutally murdered etc. and it begs the question, why did they not leave when the proverbial writing was on the wall? Was it not written large enough for even them to see from their ivory towers? or were they simply in cosy denial continuing to believe in their own infallibility? Well, as Mr. Dylan wrote; “the times they are a changin’ and time is fast running out for the scum who reputedly manage our country. Leave now while you all have the luxury of time and a free “get-out pass’ or suffer the coming violent revolution “by the people, for the people’ THEY have sown the seeds of discord, debt, wars, state sponsored culling via the nhs and “care pathways”, vaccines, coming food shortages, famine and death. They have sated themselves on the souls of abused and murdered children and they WILL reap the whirlwind!
Yours in liberty, Reiverdave.