It's a conspiracy. Nothing else explains it.

Every time I go out looking for them they seem to know I have my camera. When I don't have my camera, they appear in large numbers and sit looking at me, taunting me, from less than three feet away. It just happened again as I scarfed a pizza and a couple of bottles of the local beer. Kadji, it is called, and it is a clean, crisp lager. But I divest.

Anyhoo, I have given up. I am growing obsessive and the hotel staff are giving me funny looks. There may also have been complaints from other guests. Apparently, leaping out of bushes screaming "AHA!" and "GOTCHA!", then falling to one's knees and bursting into tears, is not acceptable behaviour.

In despair, I turned to Mr Google.

This is a picture (of a relative) of the elusive, camera-shy little bastards: 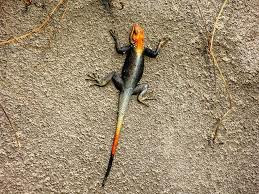 I know there is more going on in the world more worthy of a blog entry but right now, the lizards have had consumed my life.

So David Ickes 'lizard men' have defeated you old chap!!

What is the locals take on events in Japan?

My dad used to feed them chocolate when he served in Aden, try that.

I wonder if David Attenborough has this trouble?

Normally, cameramen risk being eaten by lions or sharks. Few, if any, have ever been arrested or carted off by the men in white coats. Although one or two of them might be a little odd by now. Standing in a swamp for a fortnight waiting for a particular creepy-crawly has got to have some effect on the human mind.

Much as I love the lizard pictures you should avoid being the first to try to explain this in a court room.

"All that most maddens and torments; all that stirs up the lees of things; all truth with malice in it; all that cracks the sinews and cakes the brain; all the subtle demonisms of life and thought; all evil, to crazy Capt Ranty, were visibly personified, and made practically assailable in that lizard..."

I'm glad that you have managed to do something very important. i.e. find the local beer !

PS Snow in Scotland today, I bet that you are glad to be in Africa.

I bet deep down inside they are probably as cute and cuddly as a kitten and non-poisonous should they bite. Try picking one up and it might linger on your fingertips long enough to snap another photo.

Which one of them was David Cameron?

I once caught a lizard by the tail while on holiday in Yugoslavia (I was 13) and was left holding the tail while the lizard escaped. I promptly burst into tears because I thought I had killed the lizard but apparently it's normal and is their built in escape mechanism. The tail grows back.

I'm not sure if it was just that particular type of lizard that had a detachable tail but I thought I'd warn you not to try it lol.

William: shock and horror is the most common opinion, utter disbelief from from some. The images are horrifying.

Sue: I lobbed them bits of ham from my pizza and they liked it but the waitress didn't!

WoaR: I have...modified my behaviour but I am still keeping an eye out!

Julia: That piece looks very familiar. Where is it from?

DAD: Just as I started to read your comment a ferocious thunderstorm appeared out of nowhere. It lasted about 45 minutes but it was quite vicious.

Stealthy: Thanks. But my mission failed!

Anon: I have been bitten by lizards and (non-venomous) snakes before so I may try that.

Ben: I don't buy into that particular theory. Anyway, aren't they meant to be 9 feet tall?

Snakey: Yes, I have done that many times. Not sure how many times they grow back though. I always thought it was a "one time deal".

It's from 'Moby Dick', of course. Suitable amended. ;)

My old brain remembered it from somewhere...