The Newtown shootings were tragic. I do not wish to underestimate the pain the parents and relatives are in right now. It is hard to be unmoved by the images of the little ones who have been snuffed out just as their lives were beginning.

But we should never forget which organisations kill with impunity, and get away with it. Most of whom, incidentally, ensured that their citizens had no weapons with which to defend themselves and their communities. 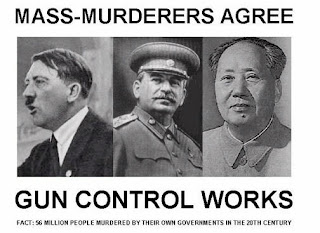 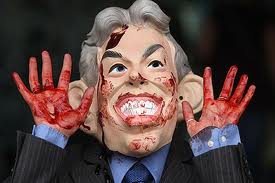 Around one million dead or maimed but he talked to God first. 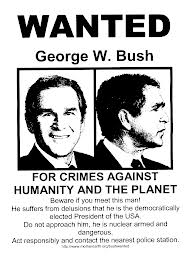 God told him to invade Afghanistan and Iraq.


So that's alright then.


And I could go on to list dozens of "leaders" who are responsible for wiping out millions more. I'm certain you can provide your own examples.

Speaking personally, I'd much rather there was a gun, or guns, in my home. In the event that a nutter wanders down my street shooting indiscriminately there will be at least one person able to stop him/her in their tracks. 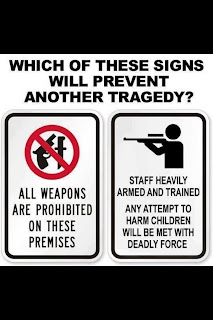 I'm a pacifist as well.

I'd just appreciate the opportunity to defend myself against those who would relieve me of life, my goods and my chattels.

In an ideal world, no-one would need guns.

But you may have noticed the absence of fairy dust, pixies and unicorns. It is a harsh place.

The whole thing smells distinctly fishy.
Just pulled from recent coverage blogs, and MSM and some 'local to Connecticut' blogs and news sites.
Early reports were full of 'two shooters'. Now all reports say one. Except there are videos of police chasing a shooter and arresting another.

There are anomalous recordings of police chatter doing the rounds that mention the word DRILL and say there are two or three shooters not one.

The young chap alleged to have killed 27 people in three different parts of the school and himself in less than ten minutes was alleged to have been carrying a pair of handguns, an 'assault rifle', enough ammunition to kill hundreds of people whilst wearing a heavy bullet proof vest, all the black gear which renders any eyewitness useless and yet he was an autistic geek whose body wasn't what anyone could call 'athletic'.

Demonised to date in this event are
Autistic boys,
Geeks and nerds,
Goths,
Assualt rifles,
Guns in general,
The gun lobby in general,
The NRA in particular
The Republicans
Home schooling
Survival planning
Straying outside normality where normality is decided by the state.

The timing of the event is all very convenient as well. It took ten minutes or so for the whole thing to be over before any sort of the plethora of 'law enforcement' agencies arrived on site.

Then there is the 'banging on the door' where the alleged shooter is asking to be 'let in' and yet he was armed to the teeth and he could have simply shot through the doors so why didn't he?

His mother was a teacher in early reports and she was killed at school not at home. His father was supposed to be killed at home according to those same reports and yet he was separated from his wife.

Doubtless more will emerge over the coming days but the only sure thing is that whatever line the media peddles it isn't anywhere near true AND perhaps more importantly other things are being implemented, carried out, started that TPTB don't want the plebs looking at.

Coming so soon after the truly bizarre death of a nurse to who took a phone call and passed it to another nurse who 'revealed all' (and who has never been named, chastised, interviewed or made public in any way shape or form in the media, on a blog or anywhere else for that matter) not to mention Hilary (I tell no lies) Clinton is making the 'Assad has chemical weapons and he will use them' mantra rolled out by TB Liar and good old George to devastating effect even though the 'rebels' in Syria are alleged to have captured a 'chemical weapons store' then there does seem to be a ramping up of the publicity surrounding death and destruction around the globe.

BUT the only thing I struggle to figure out is why is we are fed the goings on in America and by America day in day out?
In China a man ran amok in a school carrying a knife and injured a similar number of children and it barely gets a mention over here. Why America?

Have a look at this too:

The whole event was disturbing for many reasons.

As ever, 'tis also illustrative watching the reaction to this problem.

Uncle Rupert sent this tweet out in the hours after the shooting. Cue Sky News becoming rabidly gun-control-tastic over the last few days. Every meeja commentator they've had on has been of the same ilk. The rest of the MSM is the same. "Why does ANYONE need guns? There's NO REASON. The government can't possibly be BAD, can it? DELIVER US, BARRY!"

"In the first place, then, we have already shown, and indeed it cannot be denied, that by the law of nature every man, from the prince to the peasant, has an equal right of pursuing, and taking to his own use, all such creatures as are ferae naturae, and therefore the property of nobody, but liable to be seized by the first occupant. [...]

But it follows from the very end and constitution of society, that this natural right, as well as many others belonging to man as an individual, may be restrained by positive laws enacted for reasons of state, or for the supposed benefit of the community. This restriction may be either with respect to the place in which this right may or may not be exercised; with respect to the animals that are the subject of this right; or with respect to the persons allowed or forbidden to exercise it. And, in consequence of this authority, we find that the municipal laws of many nations have exerted such power of restraint; have in general forbidden the entering on another man's grounds, for any cause, without the owner's leave; have extended their protection to such particular animals as are usually the objects of pursuit; and have invested the prerogative of hunting and taking such animals in the sovereign of the state only, and such as he shall authorize.

Many reasons have concurred for making these constitutions: as, 1. For the encouragement of agriculture and improvement of lands, by giving every man an exclusive dominion over his own soil. 2. For preservation of the several species of these animals, which would soon be extirpated by general liberty. 3. For prevention of idleness and dissipation in husbandmen, artificers, and others of lower rank; which would be the unavoidable consequence of universal license. 4. For prevention of popular insurrection and resistance to the government, by disarming the bulk of the people, which last is a reason oftener meant than avowed by the makers of forest or game laws.

Nor, certainly, in these prohibitions is there any natural injustice, as some have weakly enough supposed; since, as Puffendorff observes, the law does not hereby take from any man his present property, or what was already his own, but barely abridges him of one means of acquiring a future property, that of occupancy; which indeed the law of nature would allow him, but of which the laws of society have in most instances very justly and reasonably deprived him.

Yet, however defensible these provisions in general may be, on the footing of reason, or justice, or civil policy, we must notwithstanding acknowledge that, in their present shape, they owe their immediate original to slavery."

William: "Demonised to date in this event are "

Cap'n - I sense a growing anger against the self-appointed MOTU as they toy with us as if we were pawns in their grand game. It is so bloody obvious now to so many how they seek to manipulate events, they can't hope to keep getting away with it. Can they?

It's going to blow up sooner or later and it ain't going to be pretty ...

Hi to Ranty and ALL our reader,

He called the bobbies.

Watch your back old mate. They will now try to stitch you up.

Americans kill many thousands of foreign children ever year because they are brown and their land has oil or drugs to be taken.

When they kill their own, they whine. It's a set-up, again, and won't stop them butchering more innocents abroad and at home.

If people can't see that this is an excuse to remove weaponry from people with a right to defend themselves... they're retarded/f**ked!

BTW... C*nty Cameron signs up to the stupid clubs EU army to keep us in line late last week... As if these dog w*nkers are ever going to let us out without us downing tools and telling them, enmasse, to place their heads between their legs and lick their own shriveled, saggy pedo balls.

Where's the source for Hitler's gun control?! I'm not a Neo-Nazi (and apologies for posting a link to a Neo-Nazo site on your blog) but it would seem that Hitler actually supported the right to bear arms strongly: http://theneworder.org/news/2010/05/gun-control-in-germany,-1928-1945/

I'm simply discovering that 90% of what I thought I knew about Hitler and his Germany was lies. It makes sense that the current Establishment would want us to think Hitler was as Totalitarian a New World Orderist as the current regime is.