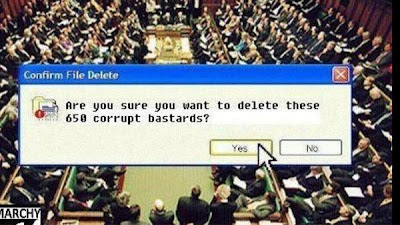 Newsboy have you thought of anger management classes for Xmas.

We stayed calm for decades.

Look where that got us.

We all should be very very angry and vent it on them. Give me the mouse I want to press YES!

I aught to clarify, I'm not ranting at those lovely Belgian, Italian, German and French people.
It is Their Govts., indeed any National Govts. are what fuel my anger.

I am beyond anger. Getting angry at the wankers achieved nothing. They don't listen if you are angry, they don't care about you being angry in fact I seriously doubt they care about any individuals other than themselves and possibly their spouses/partners/live in lovers.

There are two ways guaranteed to push them towards the edge.

1. Start saying NO at every opportunity. When you have built up confidence in this new area actively seek out or create opportunities to say NO.

2. Stop paying their membership fees aka taxes in any way you can.

They use your belief in money and your fear of not having any/enough to keep you in 'check'. They don't need money to have a good life they simply want you to think that they do. If you are focussing on money itself you are not looking at how it controls you.
Once you begin to realise that money is simply a measure of use value
and it is produced by the government and the banks OUT OF THIN AIR
and is backed by ABSOLUTELY NOTHING BUT THIN AIR you can then begin to 'manage your affairs' accordingly to ensure you have enough to live on/with/use as that is all that is really required to live a truly superb life.

Say NO at every opportunity, stop paying whatever makes you feel slightly uncomfortable, do cash or barter deals whenever possible, actively seek out ways to reduce your payments of hidden tax such as the heinous VAT, excise duty on 'nice things' whilst accepting it is all but impossible to stop paying all tax and last of all have some fun with the multitude of drones who work for the state.
Ask the buggers question after question, take nothing they say for granted, ask them to prove what they are saying and use them as target practice for saying NO and sign bugger all.

A brilliant rant and every single word is true. Love the advice at the end - you're absolutely right. How often do we ask WHY? What answer can they give apart from an honest one, even though they will avoid it like the plague?

I agree we've kept our anger under wraps for too long. It's about time they saw it in all its red blooded English glory. How much longer can these fcukers keep screwing us over before we, as a people, snap and its heads on spikes all round? I really hope I live to see the day.

I've decided that when I'm near the end of my life I'm gonna give these corrupt bastards something to crap their pants about. No worries about going to prison. Let's face it, it's a damn site better than being a pensioner on the outside. I hope more people are beginning to think that way, we could really put the frighteners on them and change a lot of things for the better.

If violence, Islam stylie, is what it takes for them to do the right thing by the indigenous of this country then I'm happy to oblige.

So long as we don't replace them with 650 different corrupt bastards.

I too am mildly perturbed by the European Union and our Government.

It worked for me at school.

Just to be technically pedantic, file deleting doesn't do anything other than mark the space as free for re-use. The original information is still there. To do a proper job you need to use a dedicated programme to overwrite the file with random data.

Strikes me you could do much the same thing in the HOC with a flame thrower...

Our only hope is to vote UKIP and pray farage isn't a sell-out.
Paris Claims