Chaos In The Great Arab Jamahiriya

Or just plain old Libya, to most of us.

As most of you already know, I spend a lot of my time in Tripoli and Benghazi. The Gods smiled on me and my last trip was postponed until March 5th. Otherwise, I could easily have been one of the many hundreds of Brits struggling to leave.

Since Friday last, I grew ever more concerned about my friends and business associates in Libya and I have been calling several times a day in the hope that I could talk to them to make sure they are alright. Last night my close friend Hosni called me. He had managed to find a landline that could still make international calls. The line was pretty bad, but what he did tell me was frightening.

The most frightening thing he told me was that these aircraft were seen firing live rounds at ammo dumps around the city: 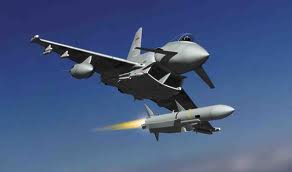 The first thing aficionados will notice is that it is not a MiG. The Libyan Air Force uses MiG's almost exclusively. In 2003 a brigadier in command of a special forces unit showed me their squadrons of ageing aircraft. He seemed very pleased with them, so I smiled along with him. (How I got to be in a special forces barracks is a story for another day).

This is a Eurofighter, more commonly known as a Typhoon. Specifically, the aircraft seen over Tripoli were bedecked in Italian colours. Make of that whatever you will. Did old Berlusconi do old Muammar one last favour before he gets nicked for the under-age sex thing? (I also freely admit that I may have misheard him. I asked him to repeat the bit about Italian flags but the line broke up).

Hosni tells me that the city is in chaos. When I was there in late January, it was safe to walk anywhere in the city, at any time, night or day. This week it turned into Moss Side on PCP. No sane person walks after dark, nor during daylight, if it can be avoided. Gangs of "pro Gadaffi" supporters are abroad with a range of bang bangs and there is no kiss kiss first. These supporters are being paid up to 3,000 Libyan dinars a day to "maintain order". Hired, armed thugs on £1,500 a day to spread the love. During that bizarre speech last night, Gadaffi said that he had not ordered anyone to fire a single round. This of course is quite true. He has ordered them to fire thousands of rounds at anyone who even smells like a protester.

He also told me that Gadaffi is finished. He said that no-one will ever support him, nor any of his family/tribe again. Saif al-Islam Gadaffi, his oldest son by his second wife, was being tee-ed up to take over. Most Libyans were reasonably okay with this because Saif was said to be a liberal. Saif negotiated the release (to much fanfare) of around 400 political prisoners. He wanted to open up the country to tourism and exploit the natural treasures in Libya. Desert tours, the fantastic beaches, 2000 year old sites like Leptis Magna and Sabratha will cause your jaw to drop. The country is steeped in history, the people are friendly and welcoming, and pretty much everything is cheap, from good hotels to eating out. A coke is 10p and a litre of unleaded is 8p. Four people can have a lovely meal for less than £20. It ought to attract millions of visitors every year but old grumpy twat at the top wasn't up for it. He (Muammar) is a control freak and demanded that the number of tourists be severely restricted. Saif wants to expand on the numbers and allow hotels to serve alcohol. Before the revolution in 1969 Tripoli was very much like any other city: bars, discos, nightclubs. Muammar shut them down but ensured his own liquor supply remained intact.

Hosni says that the country will be fucked for some time to come. Getting rid of The Leader will not be easy, it will be violent and it will be messy. Many thousands more will die on the streets or in their homes if the wider world does what it usually does, which is to wait and see. In this case, quite different from Tunisia and Egypt, he simply will not go. Even if one of his aides does the decent thing and pops two 9mm rounds into his deranged head, there are seven sons to consider. Beyond them, there are hundreds of confidants, the wider family/tribal members that want to stay on the gravy train with a boot firmly positioned over the face of the populace.

This will end badly.

Once it is over, "normality" will be a long time coming. These good people are not ready for our notion of democracy. They haven't ever needed it, why would they embrace it now? The sad truth is that Arabs have always ruled by the fist. The guy with the biggest, nailiest club gets to run the village.

Much like here, really. Only much more overt. Our leaders wield clubs too, but they wrap them up in statutes first.

On one hand I am really very sad, as I have been visiting Libya since 2001 and the changes, although slow, were quite dramatic. People genuinely looked a little happier each time I went there. (I later found out that this was because Muammar was one day closer to his inevitable death). I had made great strides whilst working with the various government agencies there and I was on the verge of signing a historic agreement for the company I work for.

But on the other hand, this was bound to happen. Hosni tried to convince me during my last visit that the Libyans would not rise up like their neighbours. I pointed out that the folks in Benghazi would start the ball rolling. "No", he said, "They are still afraid".

Tripoli is now the only city in Libya that Unkie Muammar controls*. All the others are in the hands of the protesters and Hosni tells me that peace has returned to them. They (like the Egyptians) are taking care of themselves. Policing, securing, cleaning, markets are open. Anarchy does work, after all.

All we can do now is await Salvation Day for the people of Tripoli.

May it come swiftly, and with as little loss of life as possible.

*Almost right. See this image for a detailed look at who controls what.
Scribbled by Captain Ranty at 5:43:00 pm

If they were Italian planes they wouldn't be firing anything. Watch this short video and you will see what I mean.

Good to see your friend and his family are doing okay speaking of which what did the witch doctor say?

Damaged a muscle in my lower back.

No idea how as I try to use them as little as possible.

She diagnosed this "damage" while I was fully clothed and six feet away from her.

Got a ton of drugs to take.

BTW; The Army is now on the 'protesters' side according to a recent bulletin on Al-Jazeera.

So she really was a witch doctor!!
Good news. At least the kidneys are safe.

Don't do any more damage laughing at Bill Callahan though. He is really funny and accurate.

Rest assured that my government will be the first in line to help this emerging new nation. We are prepared to sell them anything they need.

Hey CR - I'm sorry to hear that you are worried about friends over there.

I couldn't sleep last night, so I made this - it might help:

I watched that this morning. It caused me great pain. It only hurts when I laugh.

A great piece of writing!

It appeared all over the place soon after you published. Good stuff!

The trouble is, each son has an "army" of his own. It would be amazing if all the generals turned their backs on the Gadaffi's.

Once that happens it really is game over.

Good to see that some things never change.

Last week I watched all the clips I could find with Bill doing his thing.

I almost want to go to London just to see him in action.

Last week I watched all the clips I could find with Bill doing his thing.

Probably how you did your back in!

I read on craigmurrays blog that Berlusconi is shitting himself in case Gaddafi falls due to the commission he gets on oil deals coming to light. Who knows though. Seems a bit far fetched.

That is the problem. There was no "event" to cause the damage.

I think the witchdoctor was wrong but the drugs have taken away the pain so I will run with her diagnosis for now.

Until I shit a kidney.

As I lay there haemorrhaging, I can laugh and shout "You was wrong, baby!"

Libya supplies around 25% of Italy's natural gas so who knows? You could well be right.

Berlusconi is a shifty little bastard.

Ta for the insider information Ranty, little mentiond by the msm. Al Jazeera has an interesting link about tribalism within Libya, any further information about that?

My impression is that I would not have fled Tunisias revolt, still less Egypts tourist resorts yet Libya seem to be turning nasty. God (or whoever) speed your friends.

Great information Ranty and as for you Kata - I've soaked my keyboard in fennel tea.

What is it with the human race that murdering, thieving, psychopathic despots the likes of Hiter. Idi amin, Pol pot, Gaddafi,to name but a few they all seem to float to the top of the feeding chain, they say we evolved from the jungle these guys may have a brain but I think emotionally they still belong in the jungle.

Historically, the strong have always dominated the weak.

Like the tribal system, it isn't the smartest that float to the top. It's the psychopaths. They butcher their way to the top, and as they do, they scare the living shit out of everyone else.

Lose the fear and they lose control. See Tunisia, Egypt and Libya for modern day examples of this loss of fear. The risk is that you may lose your life, but the cause is noble, the cause is just. Die like a lion or live like a sheep.

The choice has been the same since the dawn of man: fight back or acquiesce.

I am tired of reaching for my ankles.

When enough of us feel the same way, we will make progress. We will change the world.

Thanks Cap'n. Hope your friends are OK...

Whichever way it goes it's not going to be pretty. My feeling is that a few years down the line, the good folk of Libya, Tunisia, Egypt et al will discover that they've got rid of one tyrant and found another. Hope I'm wrong, I truly do.

They are safe for now. They live on the airport road but just 3 Km's down the road (toward the city) Gadaffi's Goons have set up road blocks. So they are out of harms way as long as they do not go into Tripoli itself. There are hundreds of nutters with yellow hard-hats and AK's spoiling for a fight.

I think you are right. Mind you, Egypt and Tunisia settled down fairly quickly, but Libya is a different beast entirely.

If another dominant tribe steps in then they have simply swapped one arsehole for another.